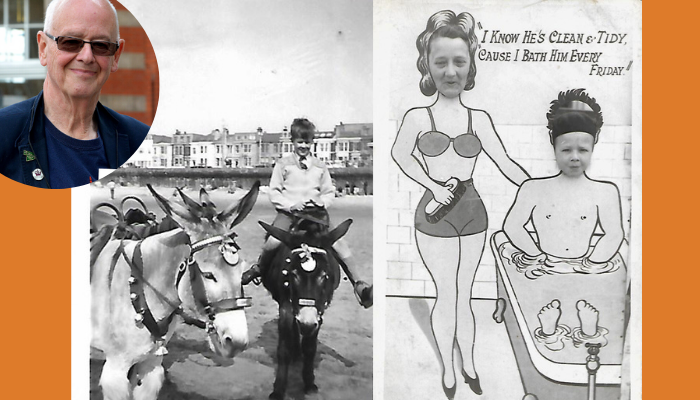 Many of us will have memories of holidays and trips out with our families as a child. For our Salford reporter – Paul Sherlock – it was difficult to remember in detail the first decade of his life but rummaging through old photos in lockdown has helped to bring memories flooding back.

He said: “Fortunately for me, my mother had written the date and occasionally other details on the back of a lot of the loose pictures and on some but not all pages of the albums. By combining this information and utilising clues, such as Blackpool Tower appearing in the photograph, I’m now beginning to reconstruct where I went and when on my seaside excursions.

“In the 40s and 50s my parents and other relatives had a simple box or bellows Kodaks, which were reserved for trips out and sunny days in the back garden.

“So, what have I discovered so far? I was born in 1947 and my adventures seem, according to the photographic evidence to be confined to our back garden and an unidentified park. Could it have been Longford Park in Stretford, who knows? In 1948 my back garden meanderings are complemented by a visit to a beach with my mother and one of my aunts.

“Now, there’s no sign of the Tower but the wall behind us has a distinct look of Blackpool to me. 1949 and I’m two years old and back at Blackpool, this time with both my parents and my paternal grandmother, and I’d graduated to paddling and building sandcastles.

“In 1950 my life took on an exotic turn and I have photographs of a trip to the Isle of Man with my mother and two of my maternal aunts. I even remember the names of the boats that we travelled on – “The Lady of Man” and “The King Orry”.

“1951 sees me at the beach again but I don’t know where, It seems to be too pebbly and remote to be Blackpool and the photos could even have been taken at more than one location, as some photos are labelled June and others July. In 1952, it’s back to Blackpool with my Mother and one of her sisters. This time I’ve mastered donkey rides and there’s a nice picture of the floral clock in Stanley Park.

“1953 is a mystery year – no pictures identified, yet! 1954 (or 1955) and it’s definitely Blackpool (evidence in the form of the Tower) with my Mother and my Aunts again. My poor Father was presumably working while we were enjoying a life of leisure but by the last week in July 1955, I find myself with my parents in Penarth in South Wales. I recall staying in a boarding house and I believe we visited an older cousin who was married and living in Cardiff.  Especially poignant is a picture of the jetty which was crucial in the development of my swimming ability.

“I have found the process of looking for the old photos pleasant and so far I have got to eight years old – so a long way to go!”