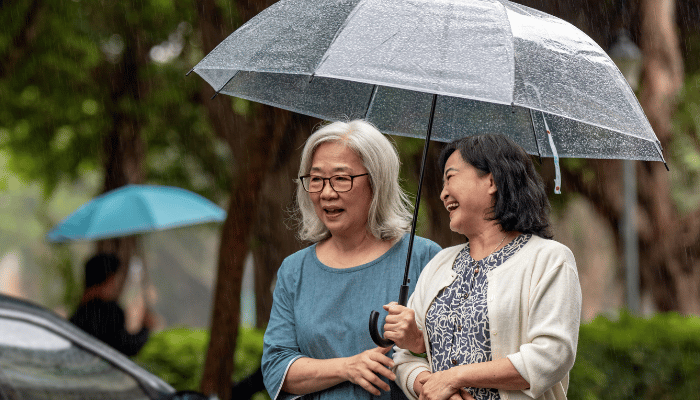 Do we have sociable spaces in Greater Manchester?

Our writer Gill explores the theme of sociable spaces in our region, inspired by a recent trip abroad, and considers whether the pandemic has affected this.

The last time we were on holiday in Spain I was very touched by a scene at the central square in a small town in the mountains. As ever, the older gentlemen in the town were gathering under the lemon trees, and even my small command of Spanish enabled me understand that they were putting the world to rights.

They discussed: what should be done about the cost of living, how disgraceful it was that people had to raid dustbins in order to find enough food to eat, what would happen in Sunday’s football and how big this week’s Lotto draw was going to be.

Then another man arrived, pushed in a wheelchair by a care assistant from the care home where he lived. She’d brought him out to join his friends for the lunch-time gossip.

And what of the women? I’ve noticed recently that they gather slightly earlier, mid-morning in the cool gloom of some of the cafés.

In Greater Manchester, we don’t quite have the climate that they have in Spain. We’re in the middle of a heat-wave right now and it’s very newsworthy because it’s very unusual. Normally, though it would be much more difficult to meet up out of doors.

However, the pandemic has done us one favour. We’ve become a little more tolerant of the cold, with the windows always open on the trams and buses, many pubs and cafes having large outdoor spaces and with many people still preferring only to meet out of doors.

The pandemic taught us as well how to appreciate nature and I note our neighbours still go out every morning about eleven o’clock for their daily constitutional. They used to walk from the house but they’re not taking the car. There are so many green spaces in Greater Manchester. So much to explore.

Greater Manchester isn’t alone in having green space; London, Birmingham and Berlin have a fair amount too. Manchester is in fact though in the top ten of British cities for green space. 20.4 per cent of its space is green, compared with 23 per cent of Greater London and 49.2% of Edinburgh.

There will be days, though, when outdoors just doesn’t work, and the creation of indoor spaces where people can safely meet is a challenge for our area. And you can still be isolated even when you’re outdoors, especially if it’s not warm enough to actually sit anywhere where you’re likely to be able to interact with other people.

There is still some concern about the virus but on the whole, even though free testing has ended, most people are very careful about keeping away from others if they have even the mildest symptoms of anything and you can still maintain some sort of distance even around a café table. Plus most establishments are still well ventilated.

Just before lockdown there was a scheme amongst Bury cafés to bring people together. You could take a card and put it on your table to say that you welcomed someone coming to share your table and chat. And as we eased out of lockdown, a similar notice appeared on our local bus shelter.

It encouraged us to talk to other people at the bus stop, socially distanced, of course, but it is possible to talk, even if you’re two metres apart.

Ah now bus stops. There’s a thing. My mother always used to chat to anyone she met at the bus stop. She found out all of what was going on in our local community. As she always pointed out, yes, there’s stranger danger but most strangers are just friends you haven’t yet met. And you’re pretty safe anyway if you’re meeting in a space where there are other people around. Like at a bus stop.

So, I’m now going to embark on a series of articles about green spaces, the big and the bold but also the smaller ones, and indoor spaces where you can chat to others. I’ll be looking not just at how age—friendly the places are but also how they enable us to mix with people from other generations, and to keep in touch with others.

How does your garden grow: Roe Green cottage

What the F: How do I get the cost of living payment and energy grant?