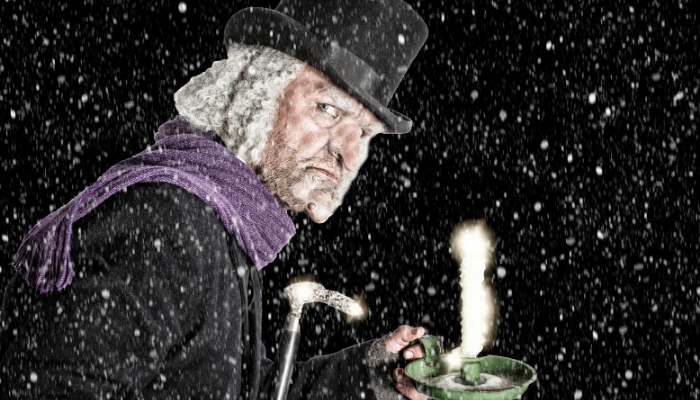 Review: A Christmas Carol from the Octagon, Bolton

Christmas isn’t Christmas without at least one consumption of Charles Dickens’ A Christmas Carol, whether it’s a modern retelling, something to do with the Muppets, or a fully blown piece of musical theatre. This week, the Octagon Theatre, Bolton has gone back to basics and has engaged a group of actors to read Dickens’ original text to us.

The actors, all local, read in various parts of the newly refurbished theatre: Colin Meredith from the kitchen and bar, Natalie Amber from the first-floor bar, Purvi Parmar from the technical room, John Afzal from the control room, Sam Black from the rehearsal room, Susan Hilton from a dressing room, Neil Ashton form the studio theatre and Brianna Douglas from the main auditorium. All wore cosy scarves and sat near colourful decorations.

I particularly enjoyed the performances of Sam Black who laughed gently with Mr Dickens, Mr Scrooge and the Spirit of Christmas Present, and of Susan Hilton whose characterisation was magnificent. But all of the actors read very well indeed.

It was so nice to be read to. A little like being back at primary school and indeed the feature of that time that I remember the best and enjoyed the most. Occasionally my eyes closed. The day became darker. Yet this was better than listening to an audiobook because I could open my eyes again and look straight into those of the reader as if they were in the room with me.

I ”attended”  the premiere which was streamed live from the Octagon and watched it with about 40 other people. That we could contribute to the chat reminded us that this was a live performance. A long one at that, though; it lasted some three and a half hours.

It is conveniently divided into staves and you might consider watching it in chunks.

You can watch it here:

A Christmas Carol still speaks to us today. Scrooge does not want to be charitable because he pays his taxes and they have the workhouses and prisons to deal with the poor, don’t they? The Ghost of Christmas Present reveals the two sickly children, Ignorance and Want. Don’t they feature as well in December 2020? Astonishingly Mr Dickens knew all about Zoom. His description of how the Spirit of Christmas past arrived almost exactly matches what we see if our internet is a little dodgy. He certainly froze and pixelated.

A Christmas Carol remains a story that touches us deeply. The cast captured some important moments very well: when Scrooge realises that Tiny Tim may die, when he sees those two miserable little children who accompany Christmas Present and when he realises that he is looking at his own funeral.

This was a good example of creative thinking by the Octagon. They provided a live show yet put no one at risk from the virus. It was free of charge but you could donate, which I did. We need the arts more than ever now. Science finds a cure and a vaccination. The arts keep us entertained, give us hope, and helps us to rationalise what is happening to us. We must make sure our theatres can come back. Several have already closed permanently.

There are 1,100 theatres in the UK. Just over 50% are charities and serve our communities. The industry relies on its freelancers and they are not all able to obtain SEISS. (Source: James Austin, via live chat 20 December 2020).

Mr Dickens aptly reminds us: laughter is more contagious than any disease. That is an argument for cherishing our arts and live theatre in particular.