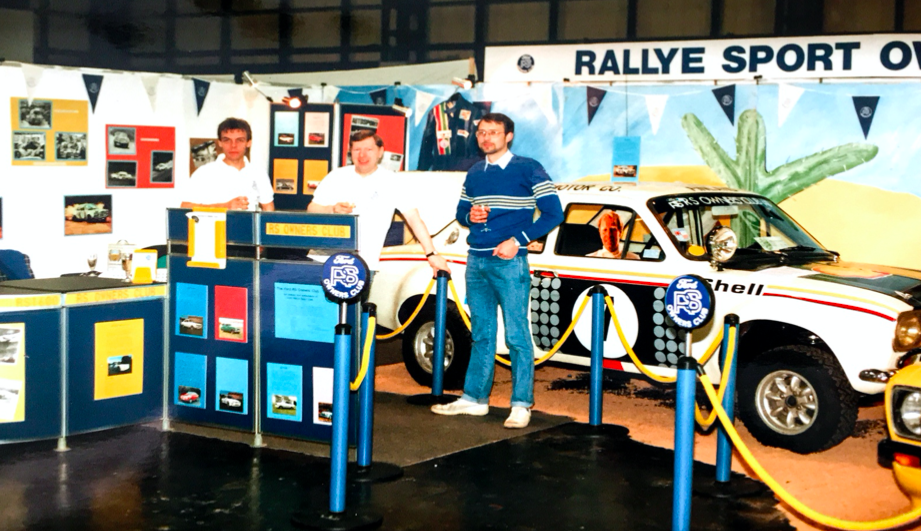 Our editor, Bob Alston, is a bit of a motorhead – a fan of anything with an engine from being a young lad. Here he shares his love affair with anything that has an engine that he inherited from his dad, the joys of car shows, adventures with his best mate, and how their group of two expanded to an owners club that had more than a thousand members.

“Being weaned on oil rather than milk, it was only natural that I would later have it running through my veins!

“My father, George, who had a lifetime’s interest in anything with an engine, naturally turned this obsession into a business, at which he did very well, earning a good living in the 50s, 60s & 70s (we were the first family on our street to own their own car and a black & white TV) until he was forced to retire due to failing physical health. By then I was working as an engineer for Mather & Platt in Newton Heath, Manchester.

“I commuted each day to work on my 1963 Triumph Tiger Cub in cream and black and even the infamous Manchester weather couldn’t stop this ritual! When the Tiger Cub was stolen from night school one evening, I bought a Greaves 250, with a Villiers 2T engine, that led to my first experience of two-stroke engines. A longing for something bigger & faster I moved on to a Triumph Tiger 100ss, which dad & I restored back to standard – if only I had kept it, hindsight and all that!

“1971 saw me pass my car driving test and the bikes came second to dry, comfortable transport. My first car was – yes you guessed it – a BMC Mini 750 with a not much bigger engine than my last bike, but it meant that I could arrive at my destination and not have to change clothes!

“During the 70s and 80s I had a number of cars after the Mini, mainly Fords as these were my Dad’s favourite, until in 1986 I bought, what was then, my dream machine – a Mk2 Ford Escort RS2000 Custom in Venetian Red with a black vinyl roof – very classy!

“I subsequently joined the Rallye Sport Owners Club (RSOC) to look for like-minded people in the Manchester area and to my complete surprise, they didn’t have a local group in this region of the country. Undeterred I posted an advert on their forum and within a matter of days got a reply from a lad called David Pearson (Dave) who also owned the same car as me and it was even a red one too. We arranged to meet up and this led to the inception of the RS Owners Club Manchester with its first two members!

“The group quickly grew to over 40 members and we found the ideal meeting place at the Carousel in Reddish, Manchester, meeting on the first Tuesday of each month.

“The following year (1987) the group decided to embark on its very first indoor exhibition, the Northern Classic Motor Show (NCMS) at the Greater Manchester Exhibition Centre (G-MEX) in the centre of Manchester, where the RSOC hadn’t had a presence before. Show organisers were contacted, passes posted out, and we had secured a stand for two cars over the August Bank Holiday Weekend.

“Being ‘newbies’ to the show scene we had no experience to fall back on, so piled as much as possible that was Ford related on our stand – a BIG mistake, as we later learnt, less is more.

“We engaged the help of two owners of pristine cars for the stand, a Mk1 RS2000 and a Mk2 RS2000 and we formed a core team of members to help out during set-up and over the weekend. One bizarre task was to source used car tyres, which we took to my house and cut in half and these would form the edging around the stand.

“The show arrived and we spent the Friday setting everything up and when we had finished, we thought we had done extremely well using everything we had collected including those half-cut tyres! Over the Bank Holiday weekend, the stand had many visitors and we even recruited some new members for our local group.

“The Rallye Sport Owners Club – Manchester Group, was in full swing after the show at G-MEX and our monthly meetings were continually well attended. During the winter of 1987 we had the time to think about next year’s show and in true Manchester Group style Dave and I wanted to be even more ambitious, so we mulled over a number of ideas, but kept coming back to one of our earlier ones – to do a stand on the theme of the Mexico. Thus, combining the Mexico Rally theme with one of Ford’s most famous rally cars, the number 7 car of Hannu Mikkola/Gunnar Palm, a 1972 RS1600 registration RWC 455K. Although this particular car never competed in Mexico it did win the 1972 East African Safari Rally. So, we thought, why not!

“At the start of 1988 Dave and I tasked ourselves with tracking down RWC 455K and by chance, after a few calls to a number of car museums, we were told that this car was in the hands of City Speed in Gloucester, so we contacted them.

“Picking up the phone at the other end was a chap named Alan Baker, one of the directors at City Speed and he suggested that we travel to Gloucester to meet with him. We arranged to travel there one Saturday in March, where we were greeted by Alan and we were certainly in for a real treat – coffee on arrival, with biscuits (well we are northerners), and a close-up guided tour of RWC 455K.

“Well, I must say, what a wonderfully pleasant and helpful person Alan was. Not only was he willing to release the car for the show for us, he would even deliver it and pick it up again at takedown, and he would do this completely free of charge, what a superb gesture, he was obviously a car nut like us. The only thing he asked for in return was that we advertised City Speed on the stand – well, what do you think? A no-brainer that one! All the way home, we couldn’t stop smiling at what we had just achieved.

“We now needed a second car for the stand and settled on Mark Slater’s pristine, low mileage, Mk2 Mexico to keep with the theme. Fortunately, Mark was one of our own members, so not much legwork to do there.

“I was still teaching in 1988 and there was one particular colleague at school, Mike Poole, who was really into the classic car scene and he just happened to be an Art teacher. Mike agreed to help us by painting the backdrop to the stand in a Mexican desert theme and make some papier-mâché cacti for us – happy days.

“As usual, the show at G-MEX was over the August Bank Holiday Weekend, so we had a few months to pull everything together, which we thought would be plenty of time, but it was upon us sooner than we thought and the week prior we were running around like headless chickens. Fortunately, Dave took a holiday that week and I was already on my Summer break. It was full steam ahead pulling everything together.

“On set-up day (Friday) Alan Baker, from City Speed, arrived around 10:30am with RWC455K closely followed by Mark Slater with his Mk2 Mexico. Dave and I were already there having picked up the backdrop, cacti, and other stand decorations the day before and the stand was already well underway with the help of a couple of Manchester Group stalwarts in the shape of Dave Stewart and Maurice Bowden.

“By around 3pm we had finished the stand and Mark was busy polishing his car having driven it to the show, while the rest of the team cleaned and tided everywhere else ready for the Saturday public opening of the 1988 Northern Classic Motor Show (NCMS). We couldn’t have done any more and were very pleased with the result.

“Saturday arrived and we were there early to greet all those interested in the Ford RS marque of car. Attendance on the stand was steady all weekend and the positive comments we received were very rewarding for all the hard work that everyone put into the whole set-up.

“For those of you that remember going to these shows in the 80s, you may recall that each club present voted for the stand they thought was the best presented for the number of members the group had and these were ranked 1,2 and 3. Well, we achieved third place for the club with over 1000 members. Considering the RSOC – Manchester Group began with just the two of us, two years earlier in 1986, and it was only our second show, we were well chuffed!

“Incidentally, after our success in Manchester, Dave & I were asked by the National Rallye Sport Owners Club committee to become National Indoor Show Organisers, which we accepted, and the following year we achieved ‘Best Stand’ at the National Classic Car Show at the National Exhibition Centre (NEC) in Birmingham with a stand themed on the RAC Rally start & finish podium, so we must have been doing something right!

“We ran the group from its inception until 2004, when we handed the reigns over to others and we moved on to motors new (non-Ford). We still remain best friends to this day and often reminisce about our achievements back then together with some of the famous motorsport people we have met along the way including, in no particular order, Tony Mason, Malcolm Wilson and Murray Walker. A great period in my life that would be difficult to better.”

Footnote: For those interested in the stats for RWC 455K, here they are: