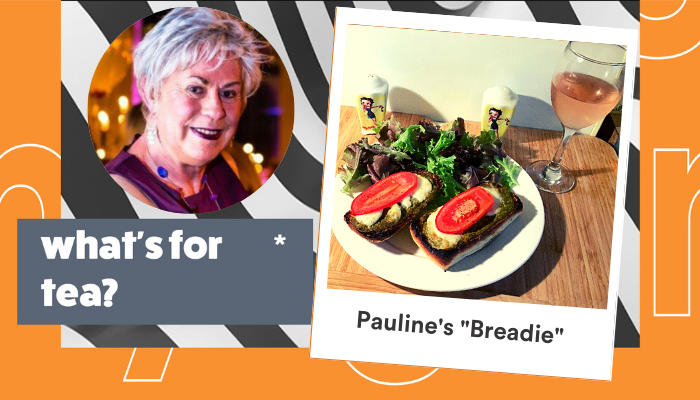 If we are not talking about music in the Talking About My Generation newsroom then we are thinking about our bellies and sharing our top scran ideas.

Here our Manchester reporter – Pauline Smith – shares one of her favourite recipes ‘breadie’ – the accompanying rose wine is optional but recommended and we can’t help but admire the salt and pepper pots.

She said: “When living in Holland as a single parent my then teenage son, who is now 31, was looking for something I could prepare that was quick and tasty. At the time we were living in Alkmaar and I looked at some store cupboard ingredients to figure out what to knock up for a quick snack as an alternative to a homemade pizza.

“Pizzas are easy to make as the Dutch sell a flour mix which just needs water and oil adding, but I didn’t have that in the house. However, I did have some ciabatta bread, some pesto in a jar, mozzarella in its plastic bag and some tomatoes. We also had a small oven which had a grill, though as long as you have a grill this recipe is easy.

“I use ciabatta rolls sliced in half; but you could use a larger ciabatta (available in most supermarkets). If it needs cooking in the oven you will need to do that first; but I just sliced two rolls in half and grilled lightly on both sides.

“While that is happening then slice the cheese and tomatoes. When the bread is ready but NOT burned then take them out (leave the grill on), and spread some of the pesto on the bread and then arrange the slices of mozzarella and tomatoes on the top…use salt and pepper and then put under the grill till cooked.

“All depends on how you want it – I would suggest that the bread is not too charred and if your grill is far enough away from the heat then you should get the cheese to melt and the toms too. I used a ready bought pesto but you could make your own as its fairly simple and quick – basil leaves, olive oil, pine nuts and either grated pecorino or parmesan cheese ground up in a pestle and mortar.

“The pesto I use is from Lidl and you could use a red pesto. My mozzarella was buffalo but you can easily use one from cows milk; my tomato was sliced plum tomato but any tomato will do. It sort of works with cheddar but not as well.

“This recipe is very flexible and quick to make. Its a sort of mini pizza, and these days many of us have jars of pesto. As you look at the colours you realise that its red green and white, the colours of the Italian flag. When my son asked me what to call it…I said “a breadie” Enjoy and as the Dutch would say, lekker bekker.”

If we are not talking about music in the Talking About My Generation newsroom then we are thinking about our bellies and sharing our...
Read more

Bury reporter, Pauline Smith, shares her recipe for Chicken Casserole a la Covid  As the autumn mists appear and the leaves start to fall off...
Read more

Bolton reporter Carole Ogden shares a seasonal recipe that is perfect for this time of the year: "I thought I would share a timely autumnal...
Read more