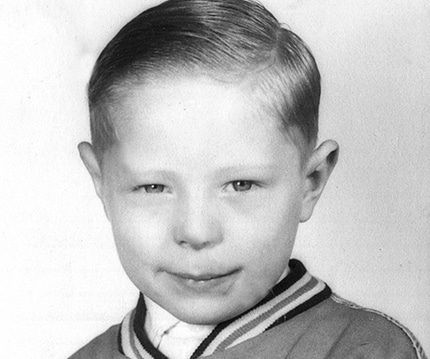 Childhood Memories: From homebaking to darts made of lolly sticks and dad’s Ford Zephyr

Tameside Reporter Bob Alston shares his memories of growing up in Manchester from time with his parents, brother, and dog Rex to special moments with grandmas and playing out with friends.

“I only have happy memories of my childhood living in Ardwick, Manchester. Now, sat here looking back I wanted for nothing really, but it’s never the same through the eyes of a child, is it?

“My dad was an iron moulder and my mum was a boxmaker. When I came into the world on November 4, 1953, my brother was already there and from St Mary’s Hospital, Manchester, I was taken home to 16 Anderman Street just a week later. My brother’s response to first seeing me was “l wanted a drum!” Well, some years later that drum came back to bite him in the form of a split lip after falling over with it on a string around his neck.

“Both mum and dad worked very hard to make sure me and my brother never went without. My grandma Henson lived with us and we had our dog, Rex, too, so, what you would call, a complete family.

“Dad changed jobs quite frequently, and being a time-served tradesman, his skills were always in demand. He often fell out with his foreman, walked out, and into another job the following day, and generally for more money! He worked for companies such as Crossley, Lawrence Scott, Stubbs, and Beyer Peacock. Mum was less adventurous and changed jobs just once from Thomas Hope’s in Ancoats to F Morrell’s in Droylsden – we never went short of filing boxes as these two companies made them for schools and offices.

“When I was around six-years-old dad’s health began to suffer from all the years of breathing in the pollution generated when casting iron and he made the difficult decision to change careers completely. Like me, dad was weaned on engine oil as a baby – like father like son – and we had lots of different cars when I was growing up. He always repaired them himself, which gave him a whole new skill base of bodywork, paint spraying, welding, and mechanics. So, this was the direction he went in.

“Fortunately, at the back of our two-up-two-down terraced was Tiffin’s coal yard, which had garages around its perimeter that Mr. Tiffin would rent out to those who owned cars in the area and dad managed to secure the only purpose build repair garage that was there giving him some much-needed customers for his new venture.

“During the school holidays I would stay at my grandma Alston’s house in Palmerston Street, Beswick, Manchester, and I think I spent more time there than at home! I always remember grandma Alston being at home baking as much as she could, her oven-bottom muffins were to die for, especially just out of the oven, sliced in half, and smothered in butter.

“I had more friends around Beswick than I did near home and one vivid memory I have was making darts from a lolly stick, a nail, cardboard, and pitch – who remembers the summer days when the tar on the roads would bubble and become gooey, hence pitch! Great fun. And just to throw in another, who played ‘split the kipper’ with a pocket knife when every boy had one? Mine was a hand-me-down from my grandad who died when I was young.

“Back in Alderman Street I remember us having the first television on our row and the neighbours coming round to watch it, this 10-inch, valve-driven, black and white marvel, in a cabinet twice the size of the screen. Later we got a bigger one from the DER (Domestic Electrical Rentals Limited)!

“We stayed in Alderman Street until the area was compulsory purchased by Manchester City Council on their Compulsory Purchase Scheme – ‘Slum Clearance’, as it became known, and we were offered a brand new three-bedroom house with a garage, on the second-largest Greater Manchester council-owned housing estate, Hattersley (Wythenshawe being the largest). I remember being very excited about moving to a new house that had an inside toilet, garden, and plumbed-in bath! As an added bonus it was near to my grandma Alston again, who moved onto the estate a few months previous.

“One Sunday we all piled into dad’s car, a Ford Consul, and headed to Hattersley. I remember that it was a bright sunny day and the first thing dad did when we arrived was to try the car in the garage and guess what? It fit. But it wasn’t wide enough for dad to get out of the car! We didn’t even see the inside of the house, we headed straight back to Ardwick and back to the outside loo and tin bath in front of the fire.

“Obviously, everyone, including dad, was disappointed when he turned the house down. This left mum and dad just six months to find something else.

“The search was now on and we definitely wanted an inside toilet and plumbed-in bath plus a garage big enough to be able to open the driver’s door and get out. I remember that this was left to dad to do. A few weeks passed and dad came home one day and said; “love found the perfect house for us. On a corner, a big garage in the yard, and inside loo and bath.” It was in Newton Heath on Culcheth Lane.

“At this time my brother was working as a bookbinder and he had his own motorbike to travel to and from work, so he was fine. Dad was working for himself as a coalman in partnership with his brother after being offered Mr. Tiffin’s business when he retired, so he used to run mum to work in Droylsden, me to school in Gorton and later pick us up again – Perfect!

I stayed at the house in Newton Heath with mum and dad until I got married in 1978 when I moved to Dukinfield where I still live with my lovely wife Dawn.

Do you share any of the same memories as Bob and this area of Manchester? We would love to hear your childhood memories from across Greater Manchester, email us at changingtherecord@gmail.com or leave a comment below.

A creative project that promotes positive mental health in local communities through connection and storytelling has launched a Crowdfunder to increase its reach across...
Read more

Sing Yourself to Better Health sessions are back for Spring

Singing is a great way to lift your mood and improve your mental wellbeing, something a lot of us could benefit from right now....
Read more