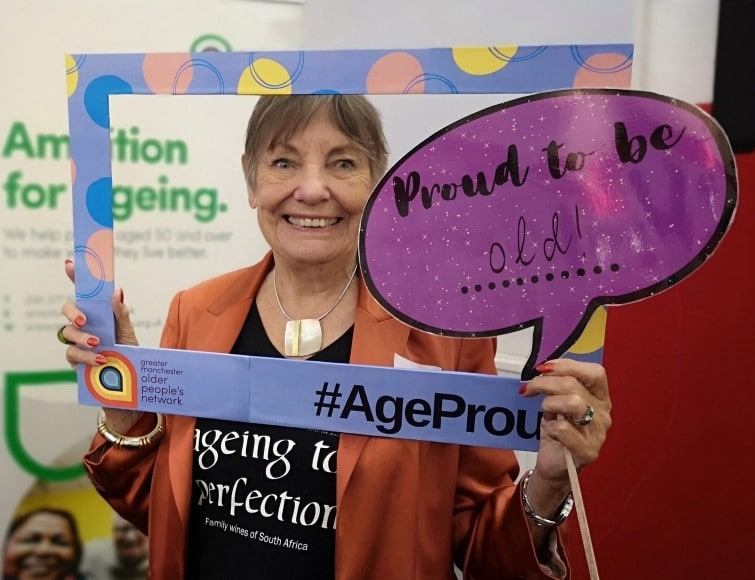 Positive and realistic images of older people in Greater Manchester are to be celebrated through a new photography competition, to be launched on International Day of Older Persons.

The “Old Frame New Picture” competition will challenge the negative and stereotyped ways older people are represented as vulnerable or frail, something that has become even more prevalent during the coronavirus pandemic.

Instead, Old Frame New Picture will celebrate the diversity of older people’s lives and their contributions to society.

Six winning entries will be featured in a digital billboard campaign across Greater Manchester next year, as well as appearing in an online exhibition and featuring in a set of printed postcards.

The best images will also form a new bank of photographs for use by local charities and other third sector organisations in their marketing and communications, providing a positive alternative to stereotyped images. There are also cash prizes.

Professional and amateur photographers can take part by submitting their photograph of at least one person aged over 50, under one of six themes:

The judges include leading photographer Alex Rotas, who specialises in challenging ageing stereotypes through photography; Virginia Tandy, Director of CADA, the Creative Ageing Development Agency, Helen Wewiora, director of the Castlefield Gallery; Mike Sweeney, BBC Radio Manchester broadcaster; and Jai Chuhan, a visual artist, winner of the bOlder prize at the Manchester Open and a member of the Greater Manchester Older People’s Network.

The competition is launching on Thursday 1 October, which is the International Day of Older Persons and runs until 13 November.

Old Frame New Picture is funded by the Arts Council, National Lottery Heritage Fund and Ambition for Ageing as part of a series of projects harnessing the arts and creativity to support Greater Manchester’s ambitions to be the best place in the UK to grow old.

The competition was planned before the pandemic and organisers have taken measures to make it safe by, for example, encouraging selfies, ensuring photographs are taken at least two metres away from the subject, and encouraging the submission of photographs taken before social distancing measures began.

“Many have struggled because of the disruption to their normal social and work lives have been disrupted.

“However, older people have also led volunteering efforts in their neighbourhoods, have remained active and resilient, and they have contributed so much to our communities.

“We want to celebrate the contribution of older people to our society and I hope this competition will show that in a positive and realistic way.”

Photographer and judge Alex Rotas has given permission for some of her professional images of older people to be used the competition launch.

She said: “As we get older, we become more diverse, not less. Yet the language used in the pandemic lumps us all together as the ‘over 70s’ or the ‘over 50s’, and then frames us all in terms of our vulnerability.

“This is ageist stereotyping at work and it needs challenging: we absolutely do need a new frame!

“I’m delighted to support this potentially very powerful photography competition in any way I can.

“Yes, it’s an opportunity for the joyful celebration of the diversity of older lives. But more than that, underlying this diversity feels like an important and indeed necessary rebuke to the stultifying language of ageism that has emerged in these ‘unprecedented’ times.”

Greater Manchester Older People’s Network member Pauline Smith, aged 72, from Bury, said: “Older people contribute greatly to society and their communities, whether they are still paid to work or if they are retired and are volunteering.

“Yet they are often presented in stereotyped way – with wrinkly hands, or doddering around on a stick or a Zimmer frame. Of course some people need aids, but this lumps all older people together and it is not a fair representation.

“I hope this competition will produce a series of photographs that shows what older people are capable of, that we are still enjoying life and that we are active in so many ways.”

Further information on how to enter can be found on the MACC website: https://manchestercommunitycentral.org/old-frame-new-picture.