I met my first love in Belle Vue….and they called it puppy love

In 1971 I was free, single, and at 12 – and that’s how it should be! But I was in love with a boy called Donny. The only problem, he lived in America and I lived in the UK, Middleton to be precise.

I cherished Donny from afar for two years keeping him as close to my heart as possible, in a locket around my neck, but not on school days, jewellery wasn’t allowed, but as soon as I got home I had him near me again. Then, in 1973, Donny and his brothers were coming to Manchester and that was my chance to meet the love of my life in person. The only problem, I wasn’t on my own, there were thousands of other teenagers wanting to meet him too. You see, my Donny was actually Donny Osmond, but I suspect you have guessed that by now!

I waited eagerly throughout 1973 to hear when the tickets were going on sale to see The Osmonds live at Belle Vue, Manchester, and as soon as I found out, my friend Julie and myself just had to be there. It was a Saturday morning that the tickets were to go on sale and we had a plan – we would take a change of clothes and some snacks to school with us and we would camp outside Belle Vue ticket office the night before!

As soon as the end of school bell rang at 3:30pm we were off, and after catching two buses we arrived at Belle Vue just after 5pm. As we got off the number 53 bus across the road from Belle Vue ticket office we got the shock of our lives. There were so many girls with the same idea as us and the queue was unbelievable, stretching all the way from the ticket office up Hyde Road and around as far as Kirkmanshulme Lane! The only thing to do was to tag onto the end.

As the night fell we made ourselves comfortable for a very long night, just then a familiar face appeared, it was Julie’s mum and our first thought was that we were in trouble for not going straight home from school. I had told my mum what we were planning, but for some reason, Julie omitted to tell hers! We were promptly told to get the next bus home and come back in the morning – Julie’s mum agreed to take our place in the queue overnight. 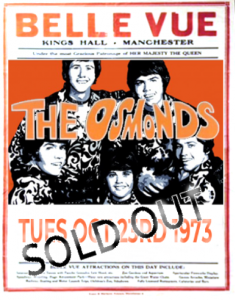 Saturday morning came and we were up very early as we were so excited to get our hands on the ‘Golden Ticket’! On the way there we heard a rumour that there had been a mad rush in the night and people had been pushing in the queue – we felt so disheartened, but we kept our fingers crossed that there were tickets left. When we got off the bus we finally found Julie’s mum and, YES, she had managed to get us two tickets, and they were really really good seats too, not that we would be sitting much!

The months passed, October 23 was fast approaching, and the reality was setting in that I was finally going to meet my love, Donny – with 7000 other hysterical teenagers! The day arrived and I couldn’t sleep at all the night before, so I was up with the lark. The concert was scheduled to start at 7.30pm, but I wanted to be there all day, just in case I caught sight of the lovely Donny arriving. Again, I wasn’t alone with this thought and the queues were already well established when I got there around 11am. As I should have suspected, I didn’t even get a glimpse, but I wasn’t going anywhere just in case!

The doors to the King’s Hall, Belle Vue, opened promptly at 5.30pm and I waited in line to find my seat – at least I could sit down for a while and catch my breath – programme in hand together with my home-made poster promising my enduring love for Donny.

The time finally arrived – The Osmonds came on stage – the King’s Hall erupted with screams from the packed audience, including me – the show started and the seats became redundant as 7000 teenagers (and some mum’s) danced and sung the night away. People were fainting all around and being carried out by a team of St John’s Ambulance people!

For two-and-a-half hours the place was in harmonious rapture as The Osmonds took us, expertly, through their complete songbook of chart hits.

Definitely a night to remember and I went on to see The Osmonds and Donny, of course, in concert a few more times after this.

If you were there on October 23, 1973 why not tell us what it was like for you, we’d love to hear from you. Leave comments below.

Mind Yer ‘Ed: Pets can help you de-stress in lockdown

Chris Nicholson, 53, from Salford says he is finding isolation and anxiety during the coronavirus pandemic a real challenge during the winter months, but...
Read more