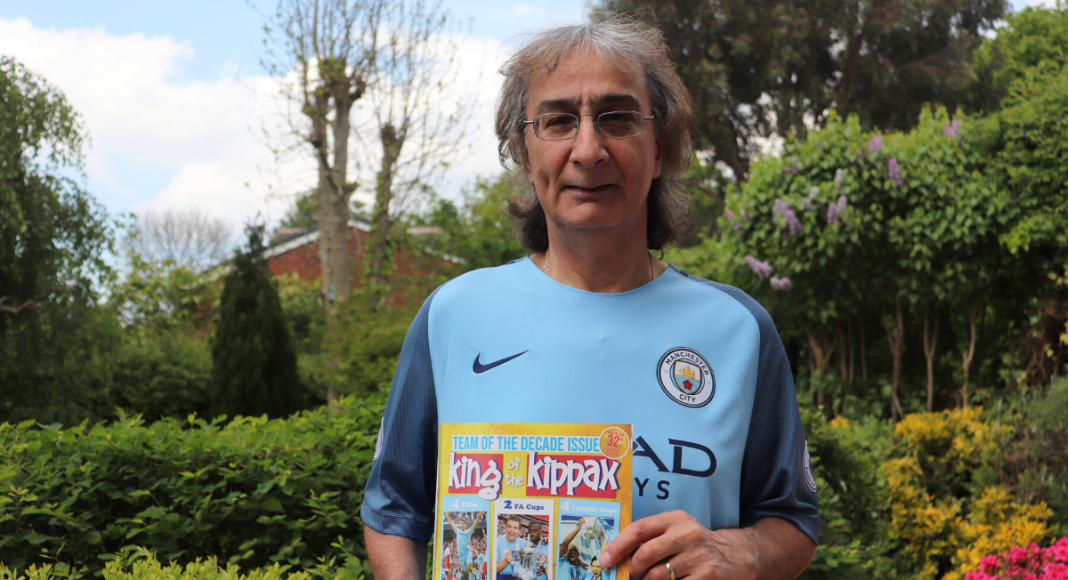 Who remembers that moment you decided whether you were going to join the blue or red side of the city?

Manchester is known for many great things; where the atom was split, the first public library, its music scene, and it truly is the home of football. I mean, we founded the world’s first professional football league.

You will get asked no other questions more in Manchester than are you a Man City or United fan? And no other topic causes more disputes among lifelong friends.

We all remember our first match as a kid, the crowd, the chips, and the look of relief on your dad’s face that you have followed in his footsteps with football fever.

It was no different for Tony Petrie, who grew up at a time when Manchester City players would pop into his dad’s café in Rusholme, he would be surrounded by fans before the game and it was where his love affair with the great game began – and led him to write for the Manchester City fanzine: King of the Kippax – which he still does 21 years later.

Here is his football journey from kick-off, and the highs and the lows along the way.

“In July 1965, I was approaching my ninth birthday. My mum and dad ran a café on Wilmslow Road in Rusholme, just opposite the old Trocadero cinema, which is now an Asian supermarket.

“Rusholme Snack Bar was my dad’s pride and joy and boasted a three-course lunch for around five shillings (25p) and it was always packed.

“Despite my young age, I was still expected to help out in the school holidays; taking orders, serving food, clearing tables, and taking payment. Some of my earliest memories are from inside that shop. And we had some rather famous faces as clientele too.

“Two regulars were Roy St Clair, a former wrestler who at that time ran the nearby Welcome Pub and his son Tony, who followed in his dad’s footsteps as a professional wrestler. Both were regulars on ITV’s, World of Sport programme shown on a Saturday. The BBC studios on Dickenson Road, where early Top of the Pops was televised were also close by so presenters, bands, and pop stars would often call in – one that stands out for me is when two members of the 60s band, The Animals came in. My older sister was so shocked that she ran into the kitchen and excitedly told my dad that “The Animals are in the shop.”  My dad, being completely oblivious as to who The Animals were, replied, “we don’t allow animals in the shop”.

“The area also had strong links with Manchester City, as the ground was just a short seven-minute walk away and when City was playing at home, the place would be packed with football fans, a good two hours before kick-off.

“Being so close to the ground also meant that after a training session, many of the players of the day would come into the café. Colin Bell, Mike Summerbee, Neil Young, and Alan Oakes were just some of the football greats that would pop their head around the door for a drink and a snack. I took advantage of these moments by getting autographs from them, and then shrewdly selling them for 1p a time to my school friends. The fact that I met so many football stars often meant that I was the envy of my friends.

“Working in the café and meeting so many City players and fans didn’t directly turn me into a Manchester City fan, my dad did that by taking me to my first game in 1964. He wasn’t really a City fan either and had only taken me to the game to show support to the players who patronised his shop.

“At that first match, I was too small to see the game properly, so I had to rely on the fans’ cheers to tell me when a goal had been scored. Although we lost 3-2, I still look back on that day with fondness. Like most football fans though, once you have found your team, they stay with you for life.

“Being a City fan hasn’t always been smooth sailing. My first away game will always live in my memory.  It was October 1971 and I had only just turned 15.  City was doing well and playing at Leeds, so I booked a ticket for the football special train, run by British Rail. Football fans had a terrible reputation and so weren’t allowed to travel on ordinary trains.

“I had never seen any problems at home games, so without even mentioning it to my parents, who were both working at the café, I made my way to Manchester and boarded the soccer special. The 45-minute journey was one of the most frightening I had ever experienced.

“There were no police or guards on the train and fans were happily writing graffiti on the train walls, slashing seat covers, unscrewing light bulbs from their fittings and throwing them out of the window and generally behaving like a wild mob. We arrived at Leeds Station to be greeted by lots of police with Alsatian dogs and we were frog marched to the ground. The dogs snapping at any fan who deviated from the route.

“During the game, a rumour was going around that Manchester United fans would be waiting for us at the designated platform at Victoria Station to “greet us.”  So, with City losing 2-0 after 75 minutes, I decided I didn’t want to go through all that again or risk getting a beating. I left the ground early, made my way to the station, and boarded a normal train to Manchester. The problem was, I quickly discovered it wasn’t going to Manchester and so I had to get off at the next station and go back to Leeds and wait for another train. I eventually arrived home about five minutes before my mum and dad at about 8.30pm.

“My dad had always assumed that when I left school, I would work in the café and eventually take over from him. Unfortunately, spending much of my youth working there left me reluctant to do so and I joined the civil service.  For him, this was the final straw and he sold the business and retired in 1975.

“But 55 years on and my love and support for City is still as strong as ever. I now share my love of the team with my son, Charlie, named after my dad, who passed away in 1990. I’ve gotten to share some wonderful memories of our beloved team with him.

“My favourite game would have to be the final match of the 2012 season.  The game was a sell-out and I watched it with my son and his friend Jamie at his house. The title race was between City and local rivals United and if City won, they would win the Premier League.

“With two minutes of the five minutes of injury time gone, City were losing 2-1 and United, whose game had finished, had won and one hand and four fingers on the title. City had to find two goals in three minutes, something they’d not done in the previous 92 minutes. I just wanted to go home. I simply didn’t want to watch the inevitable outcome, but my son said that we may as well stay and see it out.

“Within 30 seconds, City did score, but the feeling was one of it was too little, too late. Then, almost immediately, one last attack and before we knew it, the ball was in the net and every City fan, inside the ground or in Timbuctoo, went berserk. The three of us hugged and I was crying. Like most dads, I had made my son into a Manchester City fan, but it couldn’t have been at a worse time as the late ’90s was the worst period in the club’s history. So, it was so good to share that magical moment with him.

“The ’90s may not have been a good time for the club, but they marked the start of a new venture for me, as towards the end of the decade, I began contributing to the Manchester City fanzine: King of the Kippax. I have now been doing this for 21 years. You can catch me in each issue with my column: Petrified, Tony’s Monthly Roundup.

“In 1998, I wrote my first letter to the magazine. This was then followed up with the occasional letter or article, but then I hit upon the idea of writing a football season review, in the style of the 1980’s TV programme, The Rock ‘n’ Roll Years, which combined reminiscing about events of a particular year while going through the season game by game.

“My first season was 1981/82, when I was working at the Careers Office in Moss Side. I was able to intertwine topical events of the day, such as the Moss Side riots, working in Moss Side precinct at a time of high unemployment, racial tension, and other subjects while reviewing the season, game by game.

“The editor of the magazine, Dave Wallace liked it and asked me to do a regular feature. I did this for several years while also writing topical articles. I have also contributed to one of Dave’s books written about City: Us and Them. The book was about fan’s recollections of away games they had been to, with one of my three stories being about that trip to Leeds.

“Some people call me a sportswriter, which is flattering, but not what I’d call myself. I don’t look at what I do for the magazine as writing, I look at it as chatting about my club with the readers. It feels like I am sat in a bar with 3000 City fans and putting my point of view across. Being told that people enjoy what I have written, gives me a big kick, no pun intended.

“Being a City fan is like life in general: there will be good times and there will be bad times, but you must learn to accept the good and the bad. The fans of some clubs are so used to success, they expect it as a right. City fans never take anything for granted. I have also found that City fans have a great sense of humour – they need one.

“Football fans have a saying, “you don’t find a team, it finds you”, and that’s just what happened in our little café on Wilmslow Road all those years ago.”