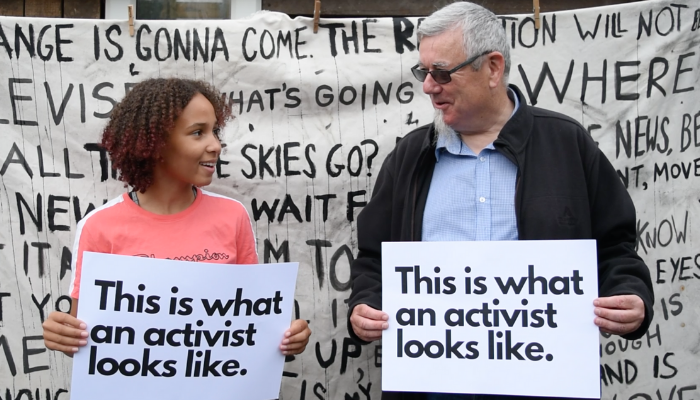 A New Greater Manchester campaign, This Is What An Activist Looks Like, is uniting generations in the fight against climate change this International Day of Older Persons (October 1).

Activists of all ages across Greater Manchester are uniting in the fight against climate change, breaking the myth that older generations don’t care.

A new campaign called ‘This Is What An Activist Looks Like’ launched on International Day of Older Persons to show how generational conflict is false and in fact those aged three to 83 can, and are, working together on the climate crisis and environmental issues.

Commissioned by Greater Manchester Older People’s Network (GMOPN) and run by the Talking About My Generation team, the campaign uses a new video and social media to highlight the inter-generational activists in action; from green transport and litter picking to protesting and growing your own food in communities across all boroughs.

Check out the video below.

The campaign video stars are coming together at a public living library event in Manchester Central Library from 2 pm – 3:30 pm today to share their stories and inspire others to make changes too.

Elaine Unegbu, Chair of Greater Manchester Older People’s Network Steering Group, said: “We wanted to share a positive message about how important it is for the generations to come together to tackle big issues like climate change.

“This is not about young versus old, it’s about all of us doing our bit, as individuals and in our communities. We can all do something and so many people are playing their part already and enjoying themselves in the process.

“Climate change is a serious business but you can still have fun and make a difference at the same time. We need to celebrate what people are already doing and inspire others to do the same. Ageism tries to divide generations – but the fight against climate change is uniting them.”

A new UK study, Who Cares About Climate Change: Attitudes Across The Generations, by Professor Bobby Duffy from the Policy Institute at King’s College London and New Scientist magazine released last week, found the generational divide over climate action is false.

The weighted study of 2,050 UK adults found that about seven in 10 people from all generations surveyed said climate change, biodiversity loss and other environmental issues were big enough problems that they justified significant changes to people’s lifestyles, with no real difference in agreement between Baby Boomers (74%) – the oldest generation polled – and Gen Z (71%), the youngest.

Professor Bobby Duffy, director of the Policy Institute at King’s College London, said: “There are many myths about the differences between generations – but none are more destructive than the claim that it’s only the young who care about climate change. When Time magazine named Greta Thunberg their person of the year in 2019, they called her a ‘standard bearer in generational battle’, which is reflective of the unthinking ageism that has crept into some portrayals of the environmental movement.

“Parents and grandparents care deeply about the legacy they’re leaving for their children and grandchildren – not just their house or jewellery, but the state of the planet. If we want a greener future, we need to act together, uniting the generations, rather than trying to drive an imagined wedge between them.”

Just this week – Greta Thunberg said: “I do think older people make things more complicated than they actually are.”

But Sam Mounfield, from Trafford, a young campaigner who is one of the video stars, said she does not see a divide between the generations.

She said: “It is important that all generations work together. The media often portrays young people as ecowarriors, battling against selfish older generations – but it is nonsense.

“We need to have one voice so policymakers and government officials listen. They need to pay attention to the messages of the This Is What An Activist looks like ahead of theCop26 climate summit in Glasgow in November and the media needs to stop stereotyping generations and pitting them against each other.”

For more information on the, This Is What An Activist Looks Like campaign – visit www.talkingaboutmygeneration.co.uk/activists.