How does your garden grow: Roe Green cottage

Our reporter Chris visits a beautiful garden which was opened up to the public as part of the National Open Garden Scheme.

On Saturday July 2 Geoff and Pauline Ogden opened their secluded quintessential walled cottage garden to the general public for the sake of charity.

The garden is at the rear of their three hundred year cottage located on the edge of the village green in the picturesque conservation area of Roe Green.

Whilst, like myself, Geoff occupies himself tending the lawns, Pauline is a passionate and knowledgeable plants-woman who has nurtured the garden since 1984 reclaiming it from the wild into the colourful, peaceful oasis it is today.

She grows plants from seed and the artfully planted (no weeds!) flowers including: lobelia, tupa, Mathia Sella , and many wildflowers such as: delphinium, evening primrose, self-heal and echium bulgari. 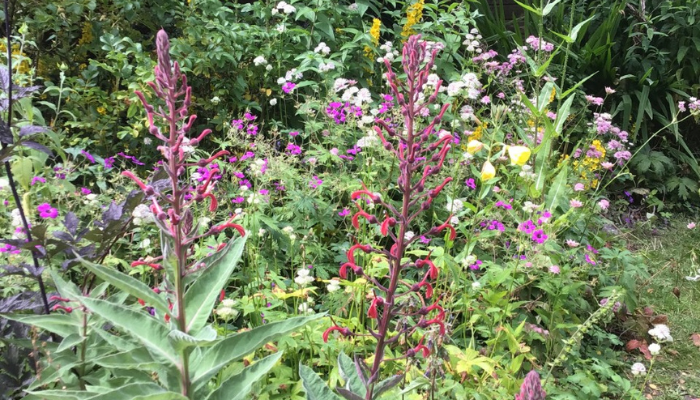 The flowers are offset by a woodland area which include a pear tree, sadly now dead (Bridgewater Estates which originally owned the property planted a pear tree in all their houses!) and a thriving ancient Bramley apple tree.

The whole is made complete by an ancient brick, roof slated bothy on the door of which a laminated list of almost inexhaustible words to describe a lavatory is attached.

When the garden, woodland area and bothy had been fully explored it was time to sit in the shade and chat to friends and neighbours with a nice cup of tea and a highly-calorific, but delicious piece of cake, home made by Pauline and friends.

The cottage exterior and garden was recently chosen as a location for a television film adapted from a Julia Donaldson story, Princess Mirror-Belle, which will be broadcast towards year end.

The three up, three down cottage featured gas lighting and cold water plumbing dates from c.1720 and was rented by Pauline’s grandfather from Bridgewater Estates. The garden used to be twice the size but the Estate management reclaimed it and reduced the rent by six old pence in compensation.

Two maiden aunts succeeded in the rental until, on their passing in 1984, Geoff and Pauline negotiated to buy it from Bridgewater. After the purchase though the Ogden’s needed to completely renovate including new footings, flooring, roof and so on. The garden had re-wilded.

After all their hard work and investment over the years the cottage is now comfortable and tranquil, with a wonderful view of the garden from their conservatory. The interior features many pictures of cricketers and grounds, Geoff’s passion, including Lancashire’s, of which he is vice chairman.

He is the proud owner of every Wisden Annual printed since 1864, and has authored a book, Born in Bolton, featuring famous cricketers born there.

The north west area of the National Open Garden Scheme represents Lancashire, Merseyside & Greater Manchester, however the Ogden’s scorn the latter which they regard merely as an administrative construct and embrace the former, which they regard as their birth right, and belong to Friends of Real Lancashire.

Like me, they also disdain the fact that Salford has subsumed outlying districts and is no longer the compact city next to but distinct form Manchester that we grew up in.

Last year Pauline and Geoff raised £1,063 as part of the overall £87,589 total achieved across the north west region. This year they have so far raised in excess of £900.

It must be stressful advertising, planning, preparing and hosting such an event, but I’m sure all the visitors enjoyed the day immensely, savoured the refreshments, bought plants for their own gardens and fully appreciated the efforts of our generous hosts.

Do we have sociable spaces in Greater Manchester?

What the F: How do I get the cost of living payment and energy grant?