Little Talking Boxes: Should Zoom be with us to stay?

As I write, the Covid 19 Omicron variant is taking hold. Plan B has been brought in and there may be a plan C around the corner. Night clubs will close in Wales on 26 December. In Scotland people are advised not to mix more than three households. Earlier this week the government decided that we would need a Covid passport to enter night clubs and events that that attract a large number of attendees, events such as football matches.

We are once more encouraged to work from home. Even before that, though, I noticed that the Metrolink car parks at Radcliffe and Whitefield were emptier than they used to be during the working week. Now the Whitfield one is closed and on Thursday 16 December at 10 a.m. there were plenty of spaces at Radcliffe, including on the lower level in the covered section.

Have people continued to work from home anyway? Are there always a certain number of people isolating? Have there been some redundancies? I suspect all three factors contribute to the empty car park.

Video conferencing came into its own during the first lockdown, with Zoom being the platform that most prefer. Indeed, new vocabulary has come into our repertoire. “Are you zooming tonight?” “I have a Zoom at 8.30.” “Let’s fix up a Zoom.” This company has grown over the last two years. However, when the Pfizer vaccine was shown to be 90% effective the share price dipped. Zoom has to hold its own now against such giants as Amazon, Google and Microsoft and on the whole it does. Now that we’ve “opened up” a little it is being used less but certainly hasn’t been abandoned. 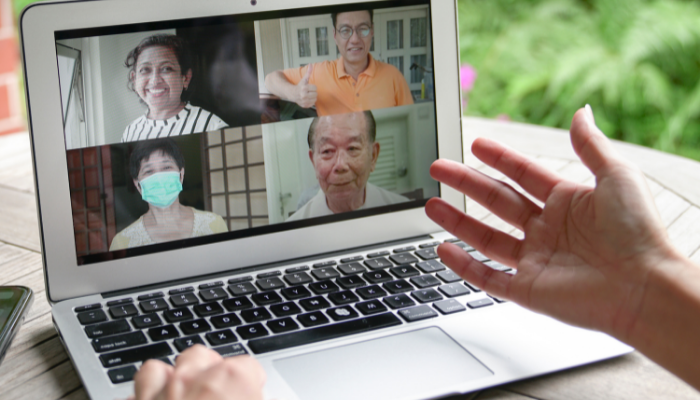 It’s not that we didn’t have video conferencing before. The University of Wales has used it frequently for twenty years or so – well you try getting from Cardiff to Bangor at the best of times but especially in the bleak mid-winter. Multi-nationals have also used if for a similar length of time. Skype has become popular as a means for families flung world-wide to keep in touch. However, now that we have been forced into this a little more, we are beginning to appreciate its potential and we’re grateful for it; compare out experience of the pandemic with what happened during outbreaks of the plague and cholera. We may have been just as confined but we were less isolated.

We haven’t rushed away completely from our beloved Zoom. Many meetings have become hybrid in two ways; some meetings alternate between being face to face and online and other meetings are held in person and on Zoom (or similar) at the same time.

Many theatres are offering online presentations alongside in-house performances. Our own local Octagon has done this. Tickets are very reasonably priced – we have paid £10.00 for a whole household to share a show. This goes some way towards plugging the revenue gap caused by all those months without live theatre and the smaller audiences necessitated by social distancing. Many committee meetings now take place on Zoom, including for instance that of the local Lancashire Authors Association.

Church, wedding and funeral services can be shared live and by video conference at the same time. Many AGMs take place on Zoom – and are often very well attended. People can join in where disability or geographical challenges have prevented them attending the in person meeting. The Manchester Literary Festival offered online events as well as the in person ones. Again these were very good value for money – I paid £20 for a bundle of several events. They were not interactive, however. The Society of Authors offered several online events that were live and could also be watched afterwards. If you attended the live version, you could ask questions via the chat or send in questions in advance. And just like at a live event, there wasn’t time to answer everybody’s questions.

The National Women’s Register (NWR) ran a conference that was in person but also had some sessions run online. Our own team meetings now alternate being in person and online. I run a U3A creative writing group and we also alternate in person meetings with Zoom ones. Some people join the “live” ones via Zoom. Let’s not forget that even the BBC offers us hybrid shows such as The Graham Norton Show and The One Show. And yes, even they struggle with the technology sometimes.

Some advantages and disadvantages

Video conferencing platforms have certainly kept us in touch with family, friends and colleagues in these difficult times. We’ve even attracted wider audiences. At the Lancashire Authors Association we’ve found that both committee meetings and general member meetings have been better attended than physical ones. The 2020 and 2021 AGMs of the Society of Authors, both conducted online, also attracted greater participation than the physical ones normally do. They can save us time and may help to save the planet; we no longer need to burn fossil fuel in order to attend. Nor do we have to risk travelling in inclement weather. It’s useful too that you can see yourself. You can monitor whether you are being professional and clear in business meetings and friendly enough in social gatherings.

However, it can be divisive. There are those that “zoom” and those that don’t “zoom.” Add that to those who now don’t wish to attend physical meetings and there are some members in most groups who will never see other members. Some people just do not have the hardware or the technical skills to use video conferencing effectively. It isn’t in any case the same as meeting in person but does have some advantages as well. Recording a committee meeting helps the minutes’ secretary! In some contexts participants mute themselves and turn off their cameras. You wonder whether they are actually really there. Yet it’s understandable; maybe they don’t want you to see their homes.

A true hybrid meeting is difficult. If a speaker is focused on a screen all of the time the people in the room with them miss out. But if they’re not visible on the Zoom participants’ cameras, those joining by Zoom are at a disadvantage. Big multi-nationals manage with huge screens and wide angle lenses. This is not yet possible on domestic and the cheaper business models of video conferencing. Larger meetings really need an administrator as well as a chair. We often only have one or two people joining our in person creative writing meetings via Zoom. We pass the lap top around and it feels like having a bunch of little elves sitting on the table with you. It would be more difficult with more people. And nobody, not even the BBC, has yet dealt with the delay between when someone speaks and when they are heard by viewers.

What we now need to do

Has the pandemic actually offered us an opportunity? We have IT and isn’t this an appropriate time to use its full potential?

There clearly still needs to be some improvement in the technology. It’s still only as reliable as the first TV sets the 1950s were and seems to be taking longer to settle down, probably because it is much more complex. And at the same time the technology gallops forward. The Internet continues to get cleverer and cleverer. There is also the question of access. This all needs to be made easily available to everyone. But post-pandemic must the new normal be the same as the pre-pandemic normal? Or are there changes we can embrace so that we may live in the best of both worlds?

Back in the late 1960s, when I was in the sixth form in a small-town grammar school, we were offered a formal lecture once a week. The idea was to get us used to university. The school sought out interesting speakers. The lectures lasted about an hour and a quarter and allowed time for questions. One lecture was delivered by someone who these days would be described as a futurologist. He predicted, as a dystopia, a time when people would have the outside world piped into their small homes which they would rarely leave. Much of what he foretold was already happening by 2019. In the early part of 2020 we were really living as he described but it was the pandemic that forced us into this rather than the technology itself.

In my own young adult science fiction Peace Child series, started in 2003, I have created a world where most meetings and most teaching are done online, with superb technology, and really effective meetings take place face to face every so often. The society is disease and pollution free (though there are other problems or there wouldn’t be a story!)

Any technology can be used well or badly, for good or for bad purposes. I like to think that Zoom and its companions have a lot to offer us and that we should learn how to make them work even harder for us.