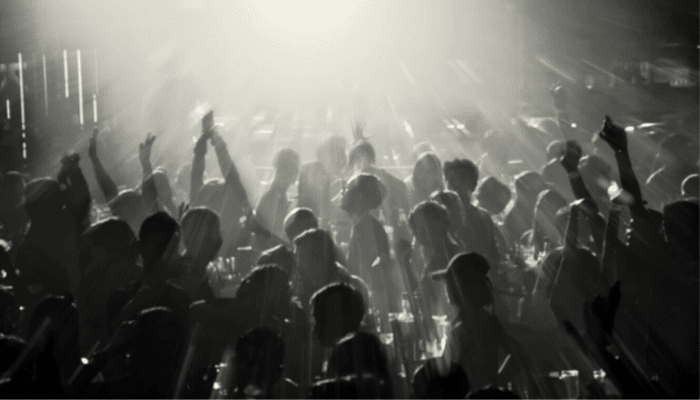 Mad Fer it: How the Hacienda changed the Manchester music scene forever

Hands up if you have spent many a night that you may not remember in the Hacienda?

Talking About My Generation spoke to former raver Christine Duffin from Stretford who admits she has forgotten as many nights as she remembers at the club.

Christine describes the interior as “urban and edgy”, she said: “I can’t remember if there were any seats in the hacienda, if there were, I never sat in them. I danced all night long.”

The post-punk nightclub, was designed by Ben Kelly and first opened its doors on May 21st, 1982, having success through the 80s and 90s at the height of the Madchester years.

The Hacienda was iconic for unleashing the Manchester house and rave scene, which New Order’s early success with Blue Monday helped to subsidise. It was owned by Factory Records and New Order, who played at the club and was host to many other live acts that went on to become world-famous such as The Smiths and later The Stone Roses, Happy Mondays, Oasis, and many more. The TV show, ‘The Tube’, even filmed Madonna’s first UK concert there in 1984.

Fun Fact, did you know who the roadie for Inspiral Carpets was that auditioned to replace the lead singer? It was Manchester’s very own Noel Gallagher. He didn’t get the part but still managed to do quite well for himself.

The Hacienda didn’t just feature bands it also was a seedbed for what would become acid house thanks to its several resident DJs such as Graeme Park and Mike Pickering.

This made the Hacienda in Christine’s words “THE club to go to, not necessarily to be seen but to enjoy the music, dance all night and the overall experience.

“The Hacienda put Manchester on the map and the cherry on the cake was that the music scene was no longer London centric.”

In 1988 ecstasy use changed clubs forever; a night at the Hacienda became a life-changing experience. This was the case for many students, Christine even admitted: “I still managed to get my degree which is bloody unbelievable!.”

The Hacienda closed its doors in 1997 and was demolished in 2002 to make way for apartments, it has however kept its iconic name.

Christine said: “The drug scene pretty much managed to ruin the Hacienda, it lost money practically every night it opened as people on ecstasy did not spend money on the bar but drank only water someone times refilling water bottles in the loo.”

This one club played a big part in the history of the Manchester music scene and Christine added:  “I have never really experienced anything like it since.”

If you have any memories, photos, or stories of your time at the Hacienda we would love to hear them.