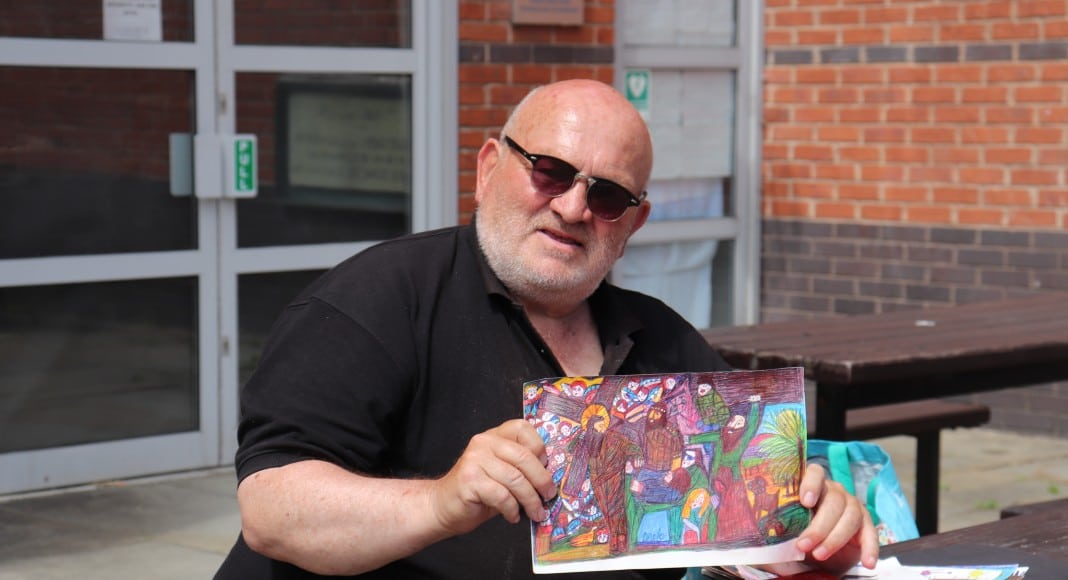 Manchester-based artist Elton Darlo is hard at work on a new series of sketches based on the things he sees while walking through our city in lockdown.

The 72-year old artist heads into central Manchester each day armed with his trusty sketchbook and art supplies, ready to draw anything that would catch his eye.

He said: “I abide by the rules. But I just had to be out, sketching the times, the moments, the days.”

The scenes that Elton has sketched over the previous few months have inspired the artist to compile these drawings into a series, known as: “Lockdown 2020”.

Some of these sketches include: a saxophonist playing to the empty streets, a pair of boxers seemingly ignoring social distancing and a cyclist with a portable hand-sanitising station.

Elton credits his art with keeping him positive through these bleak times.

The artist also plans to compile his lockdown series into a book, which will be his third to date. His other titles are: “Cardboard City”, which documents his illustrations of city life, and “Brussels Sprouts”, which artistically showcases the world of ticket touts.

And this is not the first time that Elton has relied on his artwork through troubling times.

Following the 2017 Manchester Arena Bombing, St Ann’s Square became a home for mourners and those wanting to leave tributes to those whose lives were affected by the attack. For weeks, it was a scene of tears, trauma, and distress, and Elton was in that square for 18 days, sketching all that he saw.

Of this time, he said: “It was very, very emotional because people were coming there and breaking down. Women falling down, women and children coming with flowers and I was there sketching away. I was getting the moment; it was very difficult”.  His finished result was 54 sketches and 22 canvasses.

Although it was his artwork of St Ann’s Square that gained him much popularity, he has also been published in a London Tate Modern volume (which he likened to being awarded a Grammy), received four letters from the monarchy, two from 10 Downing Street and one from former football manager, Sir Alex Ferguson – thanks to his art.

He has created over 10,000 pieces of art in his life, which are hung anywhere from Balmoral House to South Africa. Elton’s art is also backed by prominent members of the art community, including acclaimed artist Sue Kreitzman.

So, if you’re looking for a new location for your socially-distanced stroll, go to Castlefield Wharf, as you may just be the subject of one of Elton’s next sketches.

Elton said: “I don’t know what’ll happen from one day to the next, but I keep that sketchbook there to capture the moments. My pen burns my fingers. Once I’ve got a pen in my hand, anything can happen. No one’s safe.”

*Additional thanks go to Janine Ruth for providing information for this article and Mike Hayes, for audio-video edits.