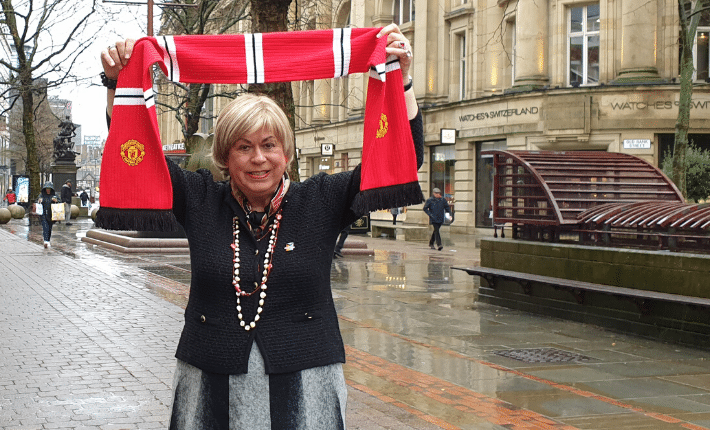 Growing up in a family of devoted Manchester United fans who all lived a stone’s throw away from the Theatre of Dreams meant it was written in the stars that as a youngster, Pauline would follow in their footsteps.

From the age of about six, Pauline started her own love affair with the club, remembering firstly being was taken to reserve team games. But thinking back to those days of the Busby Babes, her strongest first memories are of her grandfather Bob talking about the matches he went to, seeing him do the pools with the football scores and not being allowed to interrupt, so quietly eating pears with carnation milk (reluctantly).

“All my family were United fans – including my mother – and they all lived in Stretford, so could walk to Old Trafford from Jackson Street”, said Pauline. 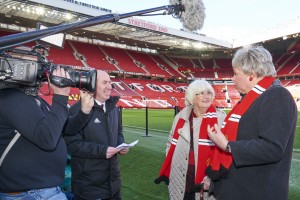 “My grandfather used to tell me about the matches as he always went to home games and my dad too – I loved those conversations. The feeling of watching them play was fantastic, and one of my first vivid memories watching the first team play was on the television at my granddad’s, it was rare in the 1950s to have a television, so it was a treat to watch the 1957 FA Cup final versus Aston Villa. Villa won 2–1. Also, of course, 57/58 was United’s first season in Europe and Munich happened.

“My granddad fought in World War One and what you would class as a real ‘man’s man’ but I remember him crying in the street – it was such a terrible time – the whole of Manchester mourned.

“But I have lots of happy memories of going to games with my dad, and with my sister and now brother in law in our teens. We would just get on the bus and get tickets there – which is unheard of now and save up tokens in the programme to qualify for bigger games.” 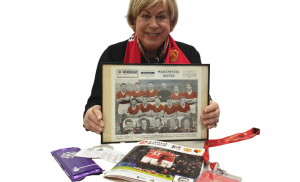 Fast forward more than 60 years from Pauline’s first United memory and she is stood on the pitch in front of a 75,000 strong crowd, in the theatre of dreams with 10 other veteran fans as a guest of honour – thanks to a joint campaign with the club, Age UK and Cadburys to tackle loneliness.

Pauline smiles and says: “It was a dream come true – I felt like I had won the lottery. If I had told myself age 6 or 7 that I would get to do that honour and be on the pitch with my team – I would not have believed it!

“The first person I told was my son, Alex, and he was able to join me at the match, where we were given VIP treatment in the hospitality suite.

“Being on the pitch was surreal – these are people you have seen and admired on the telly.”

Laughing, Pauline reveals: “It is not true what they sing about Luke Shaw you know, he is not fat at all! All of the team were very respectful and Ole thanked us all for coming. The atmosphere was amazing!”

Pauline must have been a lucky charm – as United’s run of form has not been great of late but they secured a 3-0 win over Watford.

She added: “Being a fan means you live through the good times and the bad, it is just part of the football journey. But this was a once in a lifetime experience that I will not forget.”

The invite to Manchester United came as a result of the “Donate Your Words’ campaign.

The campaign highlights the issues of loneliness amongst Britain’s older generation and comes following recent research, conducted by Cadbury and Age UK, which revealed that in a typical week, almost 2.6 million people aged 65 and over speak to three or fewer people they know, with more than 225,000 often going a week without speaking to anyone at all.

The survey found that simple, small gestures can play a part in helping to tackle loneliness as more than six million older people claimed a few minutes of conversation would make a huge difference to their week. Older people said they would feel more confident when outside the home if someone smiles or says hello when at a bus stop or in a queue, or if someone asks how their day has gone.

Pauline was interviewed by MUTV as part of the campaign and the following morning sat on the red sofa for BBC Breakfast news.

For more information about the campaign and to get involved either visit ageuk.org.uk/donateyourwords or search ‘Donate your words’.

A Salford dementia communications specialist service has secured more than £300,0000 from the National Lottery Reaching Communities fund to grow their support work across...
Read more