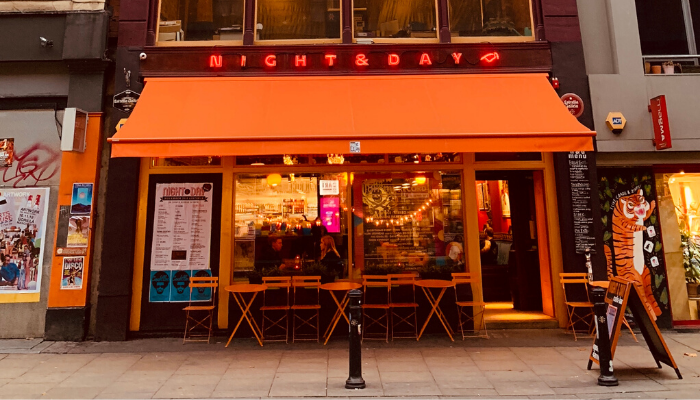 Manchester’s thriving music scene needs our support through the pandemic

Manchester-born and Stockport bred Jay Taylor has been a part of the city’s music scene for the last 18 years.

He’s played in bands, promoted for The Ruby Lounge, and is currently the ‘diary guy’ at the Night and Day Café. Now he’s working hard to secure a future for grassroots venues across the city at risk of closing due to Covid-19 as part of the Save Our Venues campaign started by the Music Venue Trust, for which he is the regional coordinator for the northwest.

Well-known for working with smaller venues throughout his career, Jay, aged 51, says they are paramount to the Manchester music scene.

He said: “I like how the energy gets trapped in small venues. If there’s something on stage that’s blasting out loads of energy it feels really potent and incredible when it’s in closed quarters.

“I get excited about something new that’s on the horizon rather than dwelling on something that I’ve just seen. And the truth is that we’ve got more venues in Manchester now than we’ve ever had. More than in the 70s, 80s, and 90s.

“We’re actually living in a boom time now because they’re everywhere. Current crisis withstanding, we were having a brilliant time in regards to venues.”

Even with the live music sector on hold, lockdown hasn’t been a time for relaxing with some box set binging, Jay jokes. Instead, he’s spent it working for the Save Our Venues fundraising initiative, created by the Music Venue Trust, which is helping to pull small venues through the current financial challenges they have been faced with.

While such businesses were supported with the furlough pay scheme and most received a support grant, many have still been left struggling, with this feeling now amplified since the announcement that pubs and clubs are permitted to reopen their doors on July 4.

The expense of running under the new guidelines, which includes implementing social distancing, enforcing limited capacities, and installing safety equipment such as plastic screens on bars has left many owners wondering how the books will balance.

Jay said: “It’s unprecedented. Think about all the costs involved in safely reopening. The government either supports venues to open in a reduced capacity with higher health and safety considerations or they pay for venues to stay closed until it’s safe to open for larger numbers.

“We’ve never had to deal with being forced to close for a long period of time before. The things that are challenging people now are completely new. Save Our Venues is here so that owners don’t feel like they have to struggle in isolation.”

Jonny Booth, licensee of Gullivers bar, The Eagle Inn and The Castle, which can all be found across the city and are all identified as being at high risk of closing, is relying on the charity to keep his venues afloat during this period. Jonny told us: “More than anything it’s nice to know that there is that support out there.

“For the live music sector as a whole, it feels really uncertain. It’s very difficult to get a grasp on what things are going to look like. No ones weathered this storm before so we’re trying to take it day by day and watch what guidance is issued for us.”

Thinking about what the future might hold for music venues in the city, Jay said: “It’s in flux. We had loads of people booked at Night and Day that we were looking forward to – like the Working Men’s Club and Tim Burgess. It’s sad that we haven’t been able to see those events play yet.

“The moment we can do it safely I want those things to start happening again. The first gig we get to put on at Night and Day will feel pretty good, won’t it?

“I want to live in a city where there are loads of exciting things happening. And I want to live in a country that supports and cares about the arts. I want to be befuddled by the amount of great things on offer. The more of those things that get to reopen, if and when that’s safe, the better.”

And Jay has no intention of slowing down anytime soon. He said: “The music world can be weird. People think there’s a seal on being creatively useful. When I turned 50 I didn’t come home and open a box and there was a pipe and slippers there. Very little changed.

“The best-case scenario is living a long and happy life. So I have absolutely no problem getting older.”

For more information about which venues are at risk and how you can make a donation, click here.