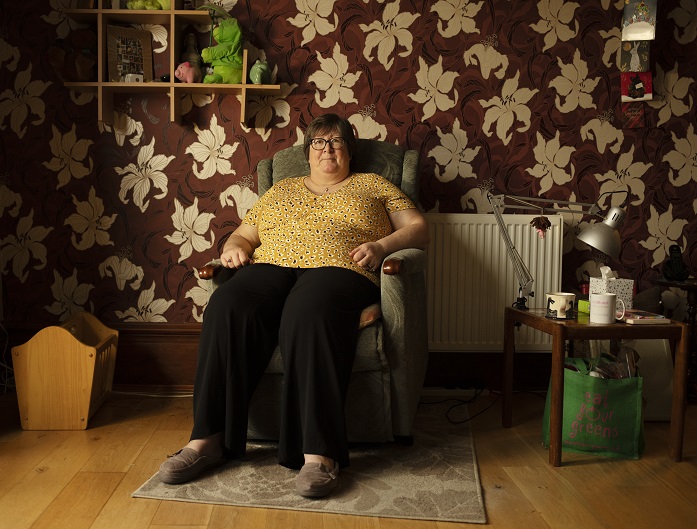 13/08/2020
By Carole Ogden
BoltonNewsNostalgiaLifestyleThings To Do

“I first got involved in the project when a friend, who knew that I live in a Victorian house, asked me whether I had a mantelpiece – something not seen as often in houses these days as when the original Worktown Mass Observation project took place in the 1930s. Bolton Museum and Library Services had been asking for people who had them, plus a range of ornaments, to be part of a forthcoming exhibition.

“I put my name forward and was surprised and delighted to be chosen to be part of it, however, I didn’t really think it through, as it involved having a film and (many) photographs taken – something that I am usually keen to avoid. I quickly googled the photographer, Madeleine Waller, and was reassured by the fact that she photographs ‘real people’, and that her portraits are really unusual and engaging, not to mention sought-after.

“Madeleine was lovely, visiting three times I think, and our focus (excuse the pun) ended up being on items in my cabinet, rather than the mantelpiece, since we have a cat that likes to walk along it, scattering most things in her path! Anything sentimental or valuable is therefore kept in the cabinet, well out of her way.

“I don’t know what Madeleine has chosen to feature, but we talked about a few things, including a Lladro figure that belonged to my mum. It was a gift to my dad from a Spanish company and she had never possessed anything so relatively valuable before, although it has to be said that the style is not to everyone’s taste, being a bit twee. She was devastated when my dad decided to dust it one day and broke off one of the fingers, then (to add insult to injury) managed to lose it, so it couldn’t be stuck back on!

“I also talked about a Christmas 1914 tobacco tin that had belonged to my grandad. I never met him, as he died long before I came along, but I have always loved the tin because I think of him carrying it through the war, before coming safely back home. I often wonder, when I look at his photo album of the desert, tents, and bombs exploding, what an amazing and overwhelming experience it must have been for him – formerly a gardener from Suffolk. I also have a lovely, carved ivory necklace that I believe he brought home for my Nan, thinking of her even as he was going through hell.

“I have so many ‘precious things’ that I didn’t know where to start – some old, some much newer and not many of them worth very much at all, intrinsically, but there are so many stories and memories connected to them, many of which I have tried to pass on to my own children. The other day I came across a battered box of shells at the back of a cupboard, given to me by a family friend when I was seven and stuck for weeks in a hospital bed under our lounge window.

“Of course, I know relationships are more important than material things and Elizabeth I may have said ‘All my possessions for a moment of time’ but, for me, many of my possessions represent a moment in time – the top of our wedding cake, a quirky birthday gift, a coffee pot from Frankie Vaughan and, while I could live perfectly well without them, they do bring me pleasure and something tangible for future generations, who I hope will be able to pass down stories about ‘batty old granny Carole, who had frogs on her wedding cake’.”

After losing her daughter to suicide six years ago, Rebecca Jackson from Bury has leaned on self-taught crafting to which she credits 'keeps her...
Read more