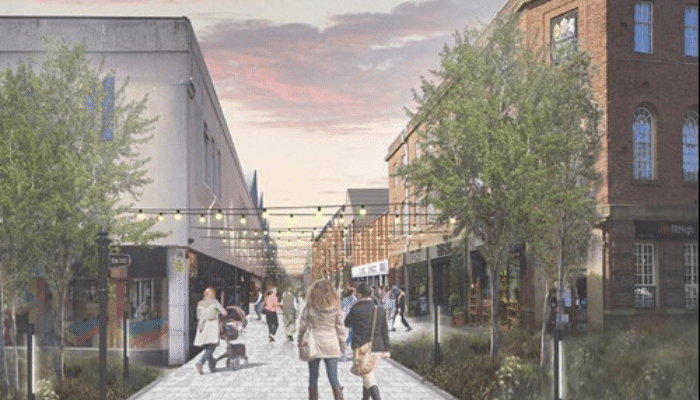 Sausage rolls, new school shoes and mum’s memories of Muhammad Ali flogging Ovaltine is what I recall about what was then Stretford Arndale.

That’s right, ‘The Greatest’ world heavyweight champ boxer visited ‘Stretty’ on October 12, 1971, two years after it was opened, as part of a promotional tour for the milky malt drink.

He was not the only famous face to visit the mall back in the day, it was often frequented by footballers including Bobby Charlton. And in 1969 it was one of the biggest Arndale Centres built in Britain, which was later swallowed up by Manchester Arndale and the Trafford Centre.

It is hard to imagine it once packed with shoppers, pageant events, and tea dances in the seventies and eighties. My strong memories in the late eighties were the trips round the market and into T J Hughes, followed by penny mix from Woolworths, then a trip to Old Trafford to watch the mighty Reds in action.

By the time I was allowed to get on the 263 bus to the Arndale by myself from Sale, it was already on a downwards spiral, but we would enjoy the freedom gossiping in the McDonalds with our Happy Meals, shopping in Clinton Cards and buying terrible trainers or platform shoes from the market.

But is it about to get a new lease of life to restore it to its former glory?

Bruntwood Works and Trafford Council are now consulting with residents over an ambitious multi-million-pound masterplan to transform Stretford Mall and the surrounding area.

Residents are invited to provide feedback on the plans via the Stretford Mall Public Consultation website, with the consultation window open until February 5.

Plans include making the historic King Street a vibrant and thriving high street, as well as improving transport links, pedestrianised streets, more greenery and open spaces, and a reconfigured town centre with better connections to the Bridgewater canal.

The Lacy Street area would be repurposed to provide a connection between the town centre and the canal, with plans for 800 varied residential units around Stretford Mall and St Matthew’s Church, which will include affordable housing.

With a focus on attracting more local businesses to the area, the plans also include proposals to create a ‘Makers Yard’ hub for small independents and the evening economy, complete with outdoor seating, eateries and bar areas.

Cllr Andrew Western, Leader of Trafford Council, said: “I am hugely excited by the wide-ranging regeneration plans for Stretford and I know local residents also share that excitement.

“Trafford Council has placed regeneration at the heart of our corporate priorities. Stretford has enormous potential, making it one of the most exciting towns in the region. By sharing ideas and plans with the local community, we’ve ensured residents are at the centre of proposals for its future.

“The proposals will significantly improve connectivity, create valuable green and open spaces, and hubs for people to gather and interact. It will also help attract local independent businesses and exciting retail and hospitality brands while enhancing the lives of local residents and visitors.”

We would love to hear your memories of Stretford Arndale and what do you think of the new plans?