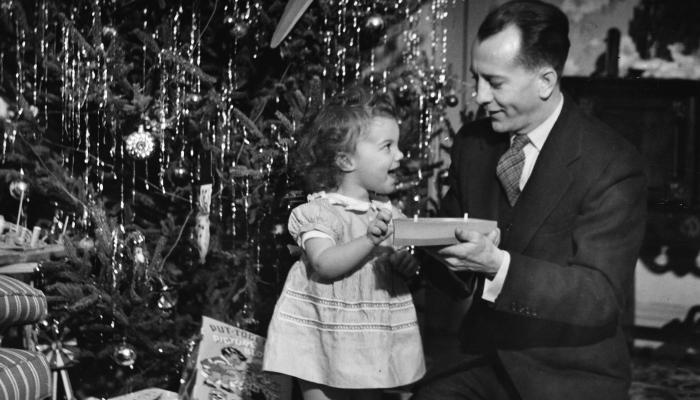 Memories of Christmas’ past

Christmas (under normal circumstances) is a time to spend with family and friends, eating too much, and celebrating together. It is also a time when we share memories of Christmas’ past. Here two of our reporters share memories from their childhood.

“‘He’s been, he’s been!’ That was the cry from my younger sister at around 1.30am on Christmas morning as she discovered that Santa had come to Ashton on Mersey and full of joy she ran into my bedroom to wake me up so that both of us could open our presents. I think I was about 7 or 8 and my sister would have been 4 or 5, so it was either Christmas 1955 or 1956.

“Years later we found out that our parents had arrived home after midnight communion and before they got into bed they put a pillowcase full of presents next to each of our beds.

“Clearly it was not their plan that either of us would wake up, and they pretended that they were asleep and were ‘woken’ up by my sister, they probably disturbed her when they left her bedroom. And of course, by the time all the presents were opened, it was about 3am, and on Christmas day we usually had a house full of people with grandparents and other relatives and neighbours.

“From then on we opened our presents under the tree later in the day.”

“I have always had mixed views of Christmas. I was born on a very wintery 20th of December. My twin was born fifteen minutes later. Unfortunately, she was stillborn so not a great start to the festive season.
“I grew used to the phrase on birthdays “this is for your birthday AND Christmas” and unfortunately my fourth birthday and Christmas saw me in the Children’s ward of Oldham Royal. This was the mid-1950s when children were still being seen and not heard. I did try-by screaming the place down. Nurses didn’t pick you up and your parents only got to see you for about an hour a day.
“As my dad was 56 when I was born I didn’t know his parents and my relationship with my maternal grandparents was short-lived, so we didn’t have massive family do’s.
“As family shrunk and eventually I lived on my own I found Christmas Day a brilliant time to do what I wanted, watch telly, enjoy the food and drink that I liked. The only trouble was that this is not how single people should spend Christmas!
“When I did meet someone to share my life with I was lucky to find someone with the same views. So now Christmas Day can include a bike ride or a crisp walk (if we are lucky with the weather) and a meal that doesn’t include a dead turkey-oh the years I have endured the comments regarding being a vegetarian, ‘what do you do for Christmas?’.
“You can call me Scrooge if you want to but like him, I really think it is humbug to be just jolly on one day of the year or to just share your good fortune on just one day of the year.  Life is for every day not just at Christmas.”

What are your favourite Christmas memories?

Do you still use Mancunian Rhyming Slang?

You've heard of Cockney rhyming slang... going up the apples and pears (up the stairs) or eating a Ruby Murray (curry) ... but of...
Read more