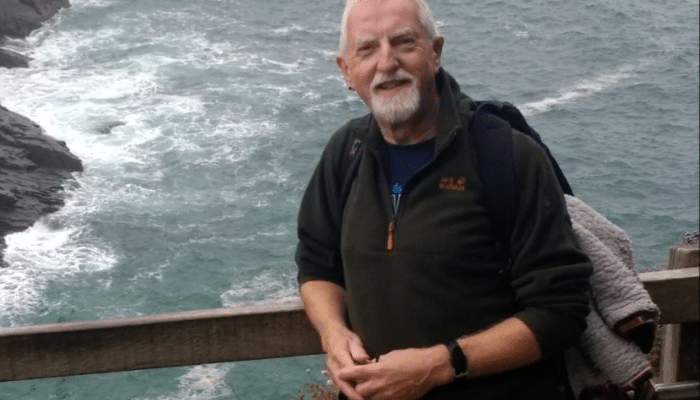 Mind Yer ‘Ed: Line dancing in my lounge and long walks have been liberating

As part of our Mind Yer ‘Ed series, Patrick Pope, from Bury, shares his experiences of the pandemic and how he had a letter waiting for him when he arrived back from holiday to say he had to shield in lockdown.

But the 70-year-old has used his love of being active to get through difficult patches – dancing in your lounge is recommended!

“It was a hammer blow, physically and mentally getting the news about shielding the day I arrived home from holiday. I’d gone from being on a great holiday to receiving a letter stating I couldn’t go outside my apartment anymore for at least 12 weeks.

“I’m active and sociable so suddenly having that in print, saying I couldn’t go outside my own domain for three months; I actually sat in my chair and burst into tears. I wept.

“There was a period for the two first weeks where I got really down, I wasn’t really involved in anything and I got very inward and introvert, which isn’t me at all.

“But being able to help other people as well as continuing with some of the groups I was part of over Zoom really took the weight off my mind.

“I was asked to be a chat line respondent for the NHS and I was asked to get involved with a few schemes through Out in the City. One of these was a buddy-line scheme and I was linked up with people who were isolated, lonely or in need of a bit of company and I would ring them in the week. We kept that going for 10 weeks and not only did it give me a purpose, it gave other people a link to the world as well.

“I know a lot of people are a bit Zoomed out now but that was also a great benefit. I’m in a choir in Bury and we did Zoom sessions every Wednesday. I’m also part of a gay line dance class in Manchester. It sounds crazy, but we dance on Zoom. We’ll do that for about an hour and a half. They play music and we dance in our lounge. I’ll move the furniture out of the way, get Zoom up on my phone and put it in a position where I can see the teacher’s instructions and dance around to the music.

“As soon as I was allowed to go outside again, I took off and did loads of walks on my own and with a couple with friends who were living close by. I’m also part of a walking group and I got back involved with that again.

“Getting to do these things has liberated me, not only physically but mentally as well. It’s something to look forward to all the time.

“We had a really good spell of weather in April and May and I’m a big fan of gardening so I worked on it endlessly. I get my green fingers form my late father. It’s so therapeutic.

“I’m aware of the kindness people have shown me week in week out. When I was shielding, quite a few people rang me every week, one of them every day, to check I was alright and people volunteered to do my shopping. I won’t forget those acts of kindness.

St Barbara’s Twigs: Christmas decorations from the greenery in our gardens

“So we cut a few branches like this,” my father would say every year. He was taking cuttings from our forsythia bush that was...
Read more

Mind Yer ‘Ed: Keeping busy, being creative and optimistic woke me up

As part of our Mind Yer 'Ed series, Stephen Cuddy, aged 60, shares his experience of the pandemic and how he’s used cooking and...
Read more

Mind Yer ‘Ed: Helping others has given me a source of strength

As part of our Mind Yer 'Ed series, Steve Sherry, chair of his local LGBT group in Bolton, shares his experience of the coronavirus...
Read more