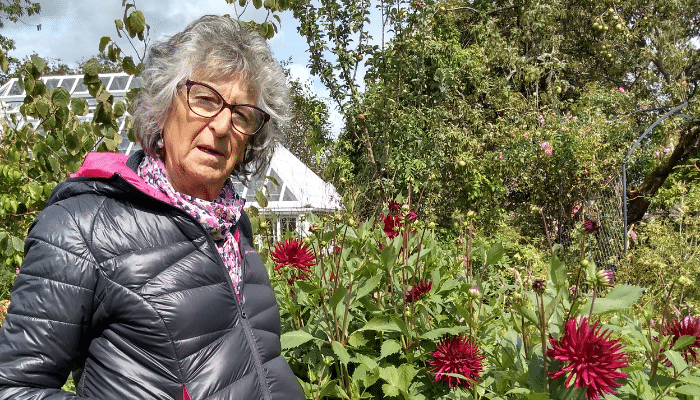 As part of our Mind Yer ‘Ed series, Helen Hallam, a member of Manchester’s Out in the City group shares her experience of the pandemic. She tells us about how getting support from the LGBTQ community, the joy of music and getting involved with virtual Pride events lifted her spirits.

“I’ve found it really difficult. Part of it has been because my partner was diagnosed with cancer just before the lockdown, so she’s been having treatment for that throughout. That’s been like a double-whammy.

“The hardest thing has been not having social contact. I’m a social being and I like to be out and about. I’m in lots of groups and my partner and I have been together for a very long time. In that sense I’m not alone but on the other hand the things I like to do have just stopped and they’ve had to stop because I dare not take the risk of catching anything when my partner’s immune system is non-existent.

“I’ve been fearful of going out when I’ve had to. Just things like going to the dentist, which I’ve been doing for years is a really scary thing to do at this time.

“I’m in several LGBTQ groups and it means I’ve got contact with people online and someone to talk about my difficulties with. Sometimes we have themes and sometimes we just chat and that’s been very important to me; to know that on a specific time during the week that I’m going to have that time with my friends.

“You’ve got that emotional contact even though those people aren’t actually there in the flesh. I always feel 100 times better when I come off those Zoom meetings.

“I’m into my live music and before the pandemic hit, I would enjoy going to the jazz club or twice a week I would to go to a couple of venues that have live rock music. I’m really missing that. Some of the bands that played at the venues I go to have done some streaming or put stuff up on YouTube, which has been quite good, but it’s not the same.

“What I do have is Spotify and I listen to that all the time. I usually go out and walk for about an hour and a half and I can listen to my music while I’m out – it’s fantastic. But sometimes, I can feel a bit sad while I’m out on a walk and I’ll be listening to my music and have a little cry. It’s just a moment when you’re feeling the pressure, but it’s a good way of relieving it.

“The cancellation of all the Pride events was sad – it’s such a wonderful experience. It’s about socialising but it’s also about saying this is who we are, out and proud.

“I’ve been to a few of the virtual Prides and there were some fantastic acts. I think LGBTQ communities have had to be closer at the moment, but I think they’ve also been more separated from the wider community.

“Anyone who struggling mentally at the moment, take my advice, get involved with anything out there that interests you and join in with virtual meetings or events. It has helped me.”

St Barbara’s Twigs: Christmas decorations from the greenery in our gardens

“So we cut a few branches like this,” my father would say every year. He was taking cuttings from our forsythia bush that was...
Read more

Material girl - Taslima Ahmed - has been given a National Lottery Heritage award for her work in bringing communities together with creativity and...
Read more

A virtual 24-hour relay event takes place this week to raise thousands of pounds to help put an end to homelessness in Greater Manchester. The...
Read more