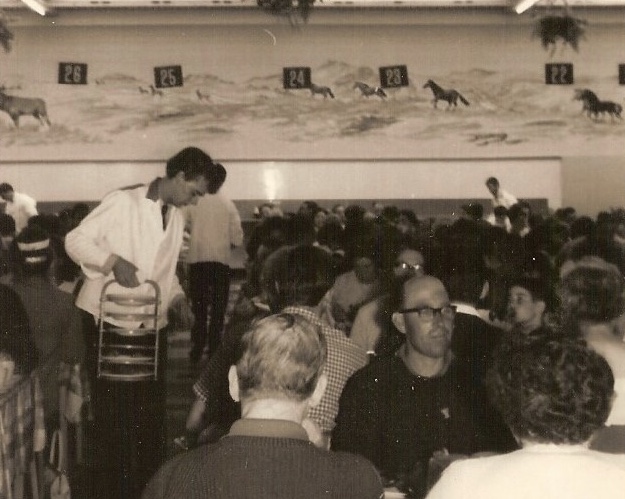 Next up in our First Jobs series, our Salford reporter, Paul Sherlock, shares his memories. What was your first job?

“My first experience of work was in 1966 during the long Summer break between finishing my A-Levels and starting my first year at University. I managed to get to the Holiday Camp in Minehead in Somerset from my home in Urmston. I think I probably travelled with my two school friends on the train although possibly my parents were somehow involved in me getting there by road. It’s all a bit vague. I do remember that the return journey was definitely by train and involved multiple changes en route (carrying ten weeks-worth of luggage) because our departure had been delayed whilst they sorted out our final wage settlement.

“The three of us from Urmston were installed in a chalet with a fourth lad from somewhere in Scotland. We were employed as Dining Hall Porters and so, having been disturbed by the “knocker-up”, I commenced my first working day wielding a mop and bucket. The campers had their three meals a day in two sittings, so our time at the dining area began with our own breakfast before the first sitting of campers and finished with our evening meal after the second sitting had had theirs, which amounted to a very long working day with a couple of breaks in between meals.

“My time as a porter was fairly short-lived, as I soon moved on to become a waiter, mainly because the high attrition rate of staff due to resignations, meant that they quickly ran out of waitresses. I think we served forty people (three times a day) at each of two sittings, so we were kept rather busy. At first, there were specific staff employed to reset the tables in between the sittings but we soon ran out of them and had to do that as well. In order to combat the wastage of staff, there was a bonus scheme in place which was forfeit, if you didn’t finish your contract period. Towards the end of the season, although almost everyone wanted to leave, the greater the accumulated bonus there was that was in jeopardy. As we got into September, things were so bad that Red Coats were being co-opted as waiters and even the Camp Manager and the Area Manager were behind the scenes in the kitchen plating out meals. As it gets colder and darker sooner in the year in Scotland, they even shipped a coach load of staff down from Ayr to bolster our numbers.

“Having worked for most of my life in the N.H.S. with its essentially “caring” ethos, I recall a very different work ethic that summer. It was a matter of management exploiting us and regularly forgetting to pay us our overtime and us filching extra food at any available opportunity. Overtime consisted of tea-pot washing (I dare not describe how we did that) and working as a waiter in a bar at night. As the wages were poor, there was a big incentive to be extra nice to your campers in the hope that they might either tip generously or treat you to a drink if they “accidentally” came across you off-duty.

“It wasn’t all bad. We did have the use of many of the facilities (e.g. overcrowded swimming pools) during our breaks and we met some interesting people. There were not only fellow UK students working their vacation but also a number of foreign students from a variety of countries. I recall some Scandinavians and some Germans in particular, who taught me phrases in their respective languages and a lad called Luke, who taught me my first French expletive. A lot of the campers were genuinely nice and many of the permanent staff were interesting.

“Having fulfilled my contract, I returned home vowing never to return, although my two school friends actually went back for the following summer. I think they moved on to a job brewing tea, which perhaps wasn’t as mind-blowing as waiting and so were willing to go back for more. For my part, I had a lazy summer that year and between my second and third years at University I managed to secure a placement at Withington Hospital getting experience in the kind of work that I would be taking up permanently the following year.”