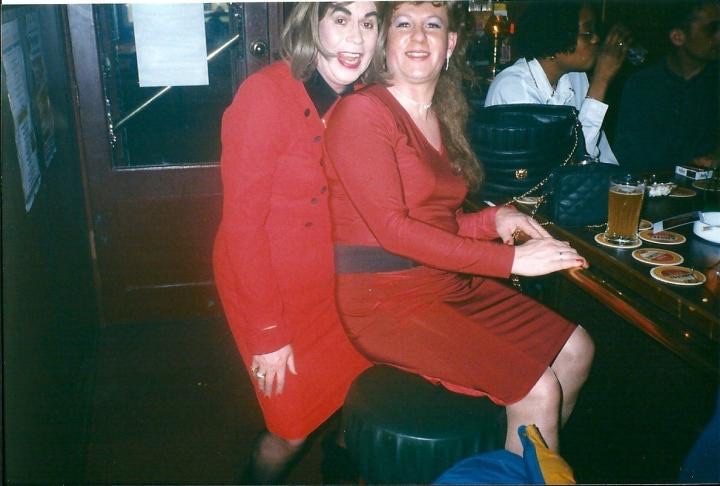 To mark the end of LGBT+ History Month, our Manchester reporter Pauline Smith, shares her first experiences of a Pride festival in Amsterdam.

“It’s over 20 years ago now and I was “old” at 50 to attend my first gay Pride and it all happened by chance, or maybe it was serendipity. After all, I was still adjusting to being a part-time Pauline and living alone in a flat.

“Back then the internet was fairly primitive and in late July 98 I was looking for people I could meet socially when I saw a piece about the Brit Soc, a group of British expats who met regularly for social events in Amsterdam and were arranging a night out to watch the Rocky Horror Show.

“I called the person organising it and asked if I could go as Pauline. She said yes and we arranged to meet before the show on July 31st, 1998 to go together. When Mandy and I arrived at the Royal Theatre Carre, which was built in the 1890s and is right on the Amstel river near the famous Magere Brug, and we met up with the other six members of our group in the lobby. One of the women took one look at me in my black and white dress with matching handbag and shoes and said…”I think you’ve done this before”.

“The show was fabulous and in English, as it was a part of the European Tour of Rocky Horror, which ran from 1996 to 2005 across Europe, and the audience joined in throughout. After all the frivolities Mandy and I went for a drink on the Reguliersdwarsstraat.

“What I hadn’t realised was that it was the Amsterdam equivalent of Canal Street in the Gay Village…and that it was the Friday evening before the start of Amsterdam Pride, which traditionally starts on the first Saturday in August with a parade of boats along the canals.

“When we arrived we found this very busy street party going on and whilst holding our beers in plastic glasses in the street and chatting we started watching through the window of one of the pubs a drag queen dressed as a KLM stewardess dancing along between the beer pumps on the top of the wooden bar and lip-syncing to Gloria Gaynor “I am what I am”. And both being friendly we started talking to people around us and found out that not only was Saturday the big parade for Amsterdam Pride but also the start of the Gay Games 1998.

“Amsterdam Pride had only started in 1996, thanks to the organisation by the Havana Bar and other bars on Reguliersdwarsstraat, and its first Parade was held that year on the canals and then it became a yearly happening.

“The Amsterdam Gay Games was the fifth one and only the first to be held outside the USA. Amsterdam had 14,300 contestants at the games and 250,000 visitors in August 1998.
“On the Saturday, everywhere was really busy and though we never got to see the Gay Games we did have a fun afternoon and evening; watching the parade.

“My lasting impression even after so many years is how amazingly friendly everyone was and the amount of positive comments we had from so many people about being out and about in dresses. For my first Pride, it was both amazing and memorable.”