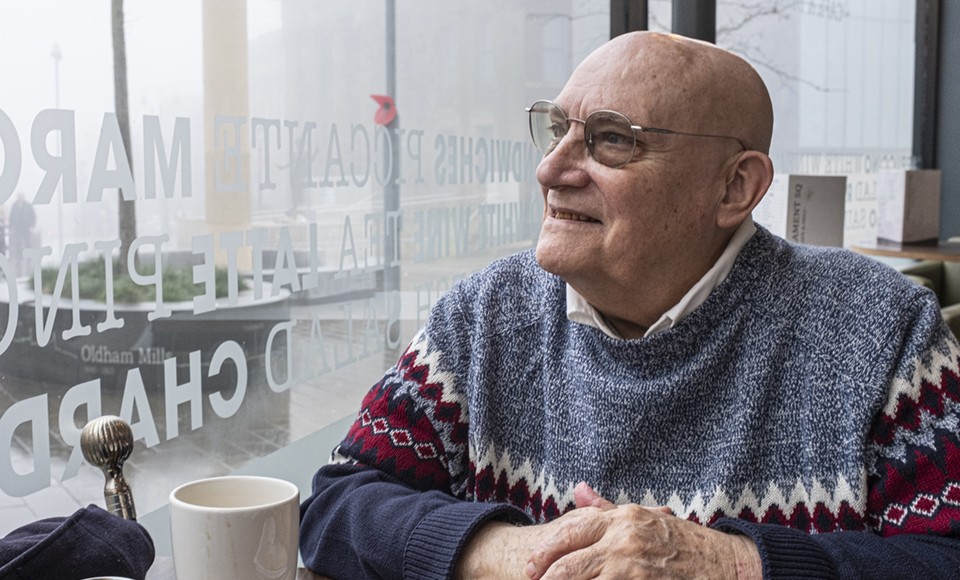 My friend Terrence on the telly

Our reporter Jean Friend recounts the experience of her good friend Terrence: from spending Christmas alone for the past 20 years, to staring in an AGE UK advert, the BBC turning up on his doorstep, getting hundreds of Christmas cards and meeting John Barrowman – the 2019 festive season was certainly a roller coaster ride for the 78-year-old from Shaw, Oldham.

“Having been involved with Age UK Oldham for over six years, the charity thought former nurse Terrence would be a good choice when Age UK HQ in London were looking for real people instead of actors to star in their Christmas Appeal video, which was to go out during Coronation Street over the festive period.

Terrence took to the acting business like a duck to water, impressing the production team with his easy manner. He had an overnight stay in the big smoke but after that Terrence thought he was returning to his quiet but busy life in Shaw.

However, he was soon contacted by the BBC to join Dan Walker on the red Breakfast sofa and when he admitted on air that he had spent the last 20 Christmas days on his own, it was all the studio team could do to hold back the tears.

The following evening when Terrence was watching the evening news, there was a knock on his door. Reluctantly he got up and timidly said through the door “who is it”. The reply was “it’s Dan Walker from the BBC I’ve got a surprise for you”.

Dan had brought along a Christmas tree and a group of young people from Oldham College and when they started to sing Terence’s favourite carol, Silent Night, it was Terrence’s turn to shed a tear or two.

The surprises didn’t stop there. John Barrowman, who was in the Salford Studio to promote his UK tour saw the broadcast. He noticed that Terrence had a rainbow rug so he got in touch to say how much he liked the rug, and would Terrence like to go over to Sheffield to see the show.

So, Terrence was chauffeur-driven accompanied by Maggie Hurley from Age UK Oldham over to Yorkshire. Maggie wasn’t very pleased when she found out that she would have to carry a rainbow rug, that Terrence had bought for John!

More appearances on the BBC followed. Little did he know that the world was watching. What started as a trickle of Christmas cards and presents from all over the world became an avalanche with sacks containing over 560 cards filled the Church Lane headquarters of Age UK Oldham.

That year Terrence shared his Christmas Day with the lady he visits in a Shaw care home as a befriender for Age UK. He looks forward to his weekly visit to see this lady. Although she struggles to remember him one week to the next his visits have helped her to be more present in the world.

When Terrence first got involved with Age UK, he was very depressed after suffering major health issues and the breakdown of a relationship. His involvement with the Older LGBT group facilitated by Age UK Oldham helped to bring him out of this dark period and he soon found himself organising events and activities and encouraging older members of the LGBT community to join the group.

With funding from Ambition for Ageing, Terrence and the group have run two events and are now working on a long-term project to bring the work of the group to the notice of LGBT people in sheltered accommodation.

There’s not a lot that gets Terrence down now, he always has others in mind. I asked him recently whether becoming a star has changed him and his simple response was: “It hasn’t really. I’m really glad that I did it and if it helps anyone that would be enough reward.” That’s Terrence!”

If you want to find out more about Age UK Oldham click here and see Terrence’s visit from Dan Walker here.

For more information on the Oldham Over 50’s LGBT Out and About Group, visit the group Facebook page here. The group meets the last Friday of the month (except in December) at Chadderton’s Over 60’s Club on Broadway, Chadderton at 1 pm. The group holds socials, theatre trips, cinema trips and they go for regular pub meals.