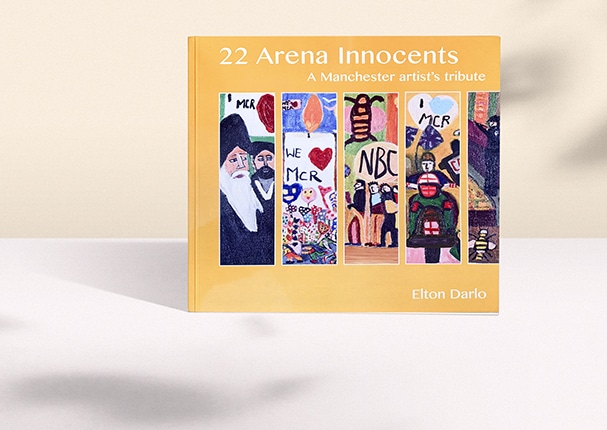 Elton Darlo is a true Mancunian and he is very proud of his roots. A self-taught artist, he uses this homegrown talent as a form of therapy to help him cope with what life has to throw at him, and at 72 years young that amounts to quite a lot!

Elton was born and raised in Gorton, East Manchester. He has an intricate knowledge of the streets of his hometown and can often be seen sketching in the city.

We featured Elton’s first book, “LOCKDOWN 2020 – An artist’s perspective”, last June when we were all instructed to isolate at home. Now he has created a new book 22 Arena Innocents that is a tribute to those who lost their lives in the Manchester Arena terror attack – as the fourth anniversary looms.

Following the attack on May 22, 2017, Elton found himself being drawn to St Ann’s Square in the City, which quickly became a shrine to the victims of this atrocity where 22 people lost their lives. He spent the next 18 days there recording all he saw including the outpouring of grief and the enormous amount of tributes that filled the area, in the only way he knew best – putting pen to paper – his preferred medium.

Sketching through the day and painting at night, Elton worked tirelessly to transform 22 poignant sketches into acrylic on canvas paintings for his latest book, “22 Arena Innocents” in tribute.

Each painting is supported by Elton’s personal account of what he observed at the time, from the initial media scramble to the area right through to the police on horseback witnessing a scene of unimaginable grief in our city, and all that went in between.

Elton was interviewed about his work at the time – his words featuring in several written articles – and his paintings were shown on the walls of a café in Manchester’s Northern Quarter for some time after.

As it’s coming up to the fourth anniversary of the tragedy this year and the permanent memorial is due to be erected sometime later, it seemed a fitting time to release the collection of paintings in the form of a book to raise money for the “We Love Manchester Charity Memorial Fund”. It is Elton’s artistic tribute to the 22 innocent victims of the bombing and 100% of the profits will be donated to the charity.

The book will undoubtedly bring a tear to your eye as you reflect on that fateful day in 2017 in our city – it did mine – and it’s a reminder of a time we all couldn’t believe we would be any part of, not just in Manchester, but also around the world.

If you would like to purchase the book for yourself or as a gift to make a donation to the charity go to https://eltondarloartist.com/