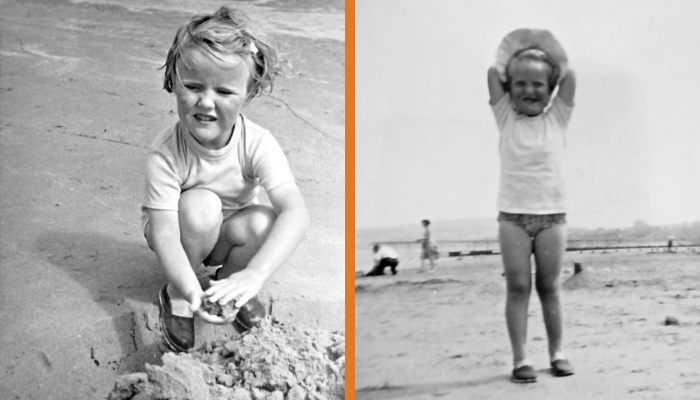 Oh, I do like to be beside the seaside: Camping in West Wales

Did you use to visit the seaside when you were younger? Here, Gill James from Bury remembers caravanning in Wales accompanied with glorious weather… until a storm hit!

“It’s better under canvas,” said my uncle and chuckled.

I had no idea what he meant. Some years later my mother explained. I was only seven when Uncle Jim made that remark and it was our first holiday at a resort other than my beloved Colwyn Bay. We were having a caravan holiday just outside Barmouth in West Wales. My aunt and uncle and my cousins were camping at Borth, just outside Aberystwyth, so we were visiting for the day.

If you walked along the river, it took about 20 minutes to get to the beach. Borth has the same lovely flat sand-castle suited sand you find at Colwyn Bay. The sea is usually calm enough to allow you to swim safely. When the weather is good, it’s a great place to be.

A little further along the coast are the wonderful sand dunes at Ynyslas. They butt onto the Dyfi Estuary, where it is definitely not safe to swim. Oh what fun we had, my dog, my dad and I, climbing up the dunes and skiing down them. They’re more protected now but back then they provided a rich playground.

We lived with my elderly grandmother, my father’s mother, and as she became older and frailer, looking after her was almost a 24 hour a day job for my mother. Auntie Vi came to the rescue. “We’ll take over for a week. You lot bugger off and go and have a nice time at the caravan.”

She handed my dad the keys. That was one of the best holidays we ever had. We were blessed with glorious weather. Except for the very last night when there was a huge thunderstorm and my father kept getting up to make sure the river wasn’t about the burst its banks. It didn’t. But only just.

One time we bumped into my cousin Geoff, his wife and children. “Come and have a cup of coffee,“ they said. They had let one of the cottages in the high street. Their back gardens lead straight onto the beach. “We have real furniture and china cups and saucers.”

A few years later, after Geoff died at just 48, I would spend time in that cottage with Jo, his wife and Liz and Giles, their two younger children. I took Jo and Liz there to see Giles who had been deemed too young to attend his dad’s funeral and was staying with the family friend who now owned the cottage.

“I recognise this place,” said my dad. “We used to come here in a charabanc (horse-drawn coach). All of us.” Really? Dad was the youngest of nine. “Your Auntie Phyllis used to change her frock three times a day.” That figured. He then told us tales of how he used to cycle there for a weekend. All the way from the Midlands. Really, Dad? Maybe. He always reckoned he had a second heart in his leg that helped pump the blood around; this came from his days of cycling.

Borth remains very significant for us. My parents-in-law owned a holiday cottage a few miles away and in 1977 they sold their main home in the Midlands and moved to the cottage, living for a while on their wits and the money they made from the house sale.

When my cousin Margaret (Geoff’s sister) died in 2006, we had a family gathering to scatter her ashes on the beach just near the Headland. There is a memorial bench to Geoff up there. Giles, always miffed that he was not allowed to his father’s funeral, had this put there. Geoff had rescued some swimmers who had got into difficulty just off the Headland.

Maybe it’s time to go back there again. I say it with some trepidation because staycations are now getting expensive and difficult to book. As it’s so hard to get aboard at the moment, those toffee-coloured flat sands and bracing sea air seem very attractive. Welsh weather and all. After all, as they say, there is no such thing as bad weather…only bad clothing.

Enjoyed this story? Be sure to check out more of Gill’s Colwyn Bay memories. And we would love to hear yours too. Leave us a comment or email us at [email protected]