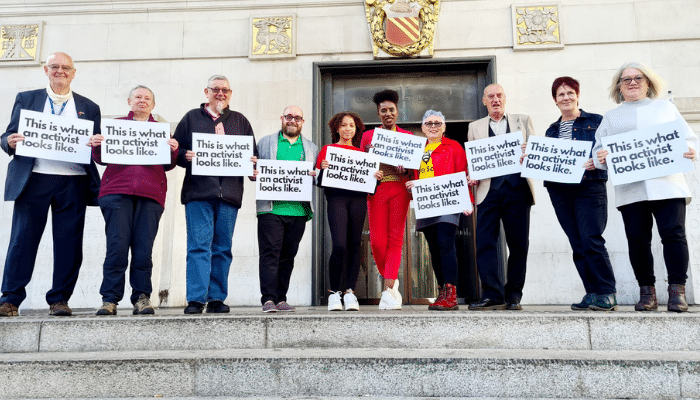 On the tele: Local activists inspire on International Day for Older Person’s and get BBC coverage

A group of local activists who have been featured in a special new film created by the Talking About My Generation team, commissioned by Greater Manchester Older People’s Network (GMOPN), took part in a living library event at Manchester Central Library on Friday morning (October 1).

The activists were available to ‘borrow’ like a book for a chat about what they’ve been doing in their community, helping to inspire others.

The new film shows how people of all ages across Greater Manchester are uniting in the fight against climate change, breaking the myth that older generations don’t care.

It highlights the inter-generational activists in action; from green transport and litter picking to protesting and growing your own food in communities across all boroughs.

The event attracted the likes of the BBC who featured the activists and part of the campaign film on the North West Tonight programme on Friday evening.

Elaine Unegbu, Chair of Greater Manchester Older People’s Network Steering Group, said: “We wanted to share a positive message about how important it is for the generations to come together to tackle big issues like climate change.

“This is not about young versus old, it’s about all of us doing our bit, as individuals and in our communities. We can all do something and so many people are playing their part already and enjoying themselves in the process.

“Climate change is a serious business but you can still have fun and make a difference at the same time. We need to celebrate what people are already doing and inspire others to do the same. Ageism tries to divide generations – but the fight against climate change is uniting them.”