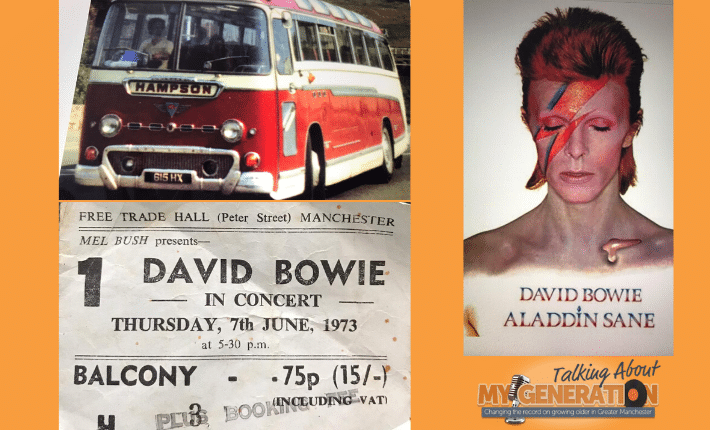 One man’s memory of watching Bowie make his Manchester debut

“The day started at about 1pm on Thursday 7th June in 1973. We were travelling from our hometown of Oswestry- a small market town on the border of England and Wales – and, as an 18-year-old who hadn’t been to Manchester before, it felt like quite the odyssey!

Organised by the local college, me and my mate Dougie Milner caught the bus at about 1pm.

After a meandering trip via Wrexham and Chester city centres – there were no bypasses then – we eventually made it to the Manchester Free Trade Hall to see the one and only David Bowie in concert for the early show at 5:30. There was also a late show – which is unheard of in this day and age!

As we made our way, clutching our tickets priced at a very reasonable price of 75p (15/-),

we joined the queue and were mesmerised by the fans in front of us. All the lads and lasses were dressed in vibrant coloured hair and clothes, with Ziggy flashes painted on their faces imitating their hero. In comparison, we looked like a couple of country hayseeds – or at least, ‘Absolute Beginners’!

As we took our spots on the balcony and waited for the man himself – who had been virtually touring non stop for the last eighteen months – he exploded on to stage in a mass of colour and cheering, all adorned in his Ziggy Stardust persona alongside his bandmate Mick Ronson.

Bowie ripped through a stunning 16 song set including Jean Genie; Changes; Suffragette city and finished with a real Rebel Rebel rouser and an encore of Chuck Berrys Around and Around.

After he left the stage we were left shell shocked, along with all his other adoring fans, as to what we had just seen and heard. It made a big impression on my life from then on, and it goes down as one of the best gigs I have ever attended. On the bus home we were still getting over what we had just witnessed. They truly were the ‘Golden Years’.”