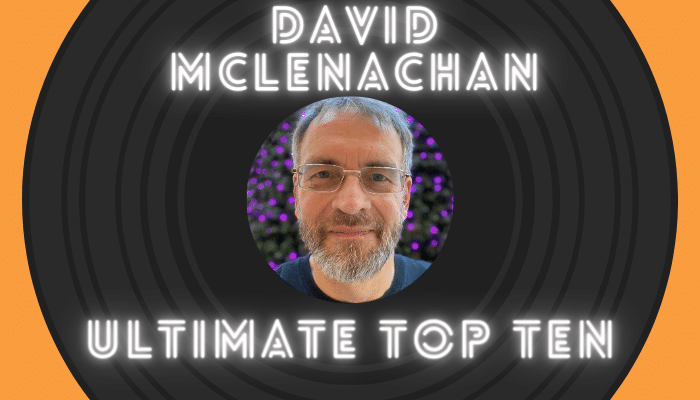 Our most recent recruit to the newsroom, David McLenachan, has a passion for live music – with more than 1400 live gigs under his belt! Here, he shares his top ten tracks of all time:

Inescapably, the first songs I loved are the best in the world, ever. I can’t justify that, it’s simply a fact for me. It could be Elton’s Rocket Man, Slade Coz I Luv You, or Bowie’s Jean Genie but I’ll go for the glam rock of Mark Bolan. I remember buying the 45 on Bury market.

Zeppelin changed my life. Really. I was lucky to see them at their last ever UK gig, Knebworth, in 1979. My whole Top Ten could be filled with 70’s rock but that would be tedious. I’ll simply list Yes, Deep Purple, Black Sabbath, Jethro Tull, Genesis, Pink Floyd, King Crimson, etc.

Despite still loving prog rock in the late ’70s, I also went to see The Clash, The Jam, Siouxsie & the Banshees and many more punk acts as a student in Glasgow. But the best gig of all time for me was standing next to Debbie Harry watching two New York bands make their UK debut, Talking Heads were magnificent, supporting The Ramones. I always enjoy telling everyone who wears a Ramones T-shirt that I’ve seen them play!

I love exploring music from around the world, and I have to add just one song to represent music from everywhere. It has to be African and this band’s back story of a group of Tuareg musicians coming out from the Sahara Desert and finding worldwide recognition is a good tale.

It’s taken me years to properly appreciate jazz. Working for Manchester Jazz Festival finally got me there. I want some contemporary music on my list so I’ve chosen this energetic up-and-coming London band. They’re great live.

Of course, it should be Bob Marley to represent reggae but I’m going for the madman Lee Scratch Perry who is still making great music today. I’ll go for something accessible but I love dub too.

The best live act on the planet has to be Springsteen. Rather obsessively I’ve seen him 17 times, including in his home state of New Jersey. I was front row at Glastonbury when he played the festival too. The energy and stamina is formidable.

It can’t be all retro music, as I explore new music continuously, so I chose my favourite new act, Julia Jacklin, from Australia. Both her albums are 10/10 for me.

There are several options for my favourite woman in music, it could have been Joni Mitchell or Lucinda Williams but I’ll opt for Kate Bush who to this day I feel remains unique.

As far as my favourite male artist, I’m not being consistent because they are Dylan, Neil Young and Van Morrison, but Nick Cave has made a huge impression on me over the last couple of years and his most recent tour had me in tears, he is that powerful.