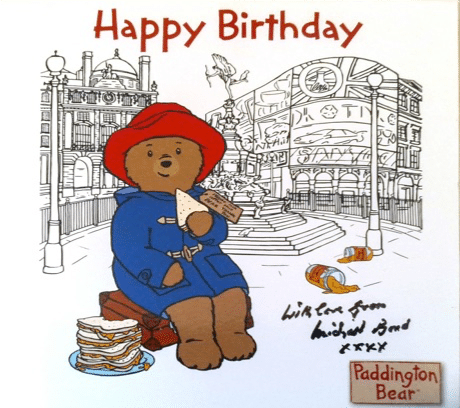 Bond, the bear and me – Paddington fan’s own tale of travels to London

Jane Lesley Pearson has been a Paddington Bear fan since she was a child but never dreamed of becoming friends with the famed author after a chance encounter. Here she gives us the ‘bear’ facts on how a misdirected letter fated her to meet Michael Bond.

Once home again I wrote to the Paddington Bear Fan Club to ask for the opening times so I could visit the shop next time I was in London. Apparently, my letter was inadvertently redirected to the home of the Paddington books author, Michael Bond, at his home address and to my utter amazement, he personally replied saying, the next time I was in London, to call in for a ‘cuppa’ with him! I just couldn’t believe that he had taken the time to reply to me and that he had kindly invited me to his home.

There was no way that I was going to pass up an opportunity like this to meet ‘Mr. Paddington’ himself, so I wrote back to thank Michael for his kind invitation and that I would be in touch again when I had arranged my next London adventure.

It turned out to be just under 12 months before I found the time to re-visit the capital and, as promised, I contacted Michael again to see if he would be available to meet with me at his home. He promptly replied stating that he was looking forward to meeting me and we arranged a time and date that was suitable. At the time, Michael lived on Maida Vale Avenue, opposite Regents Canal – an area known as Little Venice – and when I arrived, I was greeted by Michael’s wife, Sue, who invited me into the lounge, where Michael was sitting having the aforementioned ‘cuppa’.

Also, in their lounge, they have two guinea pigs – who, incidentally, have the run of the place – and they think nothing of rummaging in your handbag if you inadvertently leave it on the floor. These two miscreants inspired the ‘Olga da Polga’ books, which Michael also wrote – but these aren’t as well known as Paddington.

I was really nervous at first meeting such a famous person and someone who had actually written the books that I used to read as a child, but I was soon put at ease by Michael and Sue’s warming nature, they were truly lovely people. As is usual when you meet people like this, I ended up babbling on about how lucky I was to meet the real Mr Bond – forget all those movies starring Sean Connery et al – I was in the presence of a real hero of mine!

We had homemade elderflower tea and scones while discussing which shows I had arranged to see on the West End. I mentioned I was going to get the tube from Warwick Avenue to Abbey Road Studios to see the famous ‘zebra crossing’ that the Beatles once crossed, but Sue insisted she took me there in her car. You see, my aim was to get a photograph on this special crossing, just as the Fab Four did in 1969. Unfortunately, traffic was quite busy and I was unable to stop for long enough to pose before the drivers became impatient and beeped their horns – perhaps next time!

I also mentioned that I had afternoon tea booked at the Ritz, and Michael told me of the time that he had gone to meet someone there to do some publicity for his next Paddington book, so he thought he would take the original Bear the books are based on with him – he has pride of place on his own chair in the lounge of Michael’s home – but was told that Paddington couldn’t come in because he didn’t have a tie on! In protest, I decided to cancel my afternoon tea in support of Paddington. I believe the Ritz has relaxed this rule now, so Paddington may be a trailblazer!

Michael and Sue must have thought, what a lovely girl I was because they gave me an open invitation to come back and visit them again, so this became an annual trip ‘down south’, which I really looked forward to, and the year I was 60 Michael very kindly opened a bottle of champagne and brought out a bowl of strawberries. I have to say, it was the nicest champagne I have ever tasted and he also sent me a birthday card that year too, which I still treasure to this day. 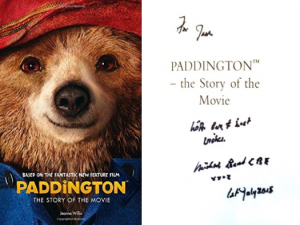 When Michael was awarded the CBE in 2015, I took the opportunity, when asking him to sign the book ‘Paddington – The Story of the Movie’, for him to put the acronym CBE after his name, and he said this was the first time he had done so, as he hadn’t even got the medal yet!

The year was 2017 and I was planning to travel to see Michael and Sue again and I was, as usual, excited to meet them again. However, when I arrived at their home on June 22, 2017, Michael was really ill, frail, and in bed, but he still insisted on seeing me. I went and held his hand and he thanked me for visiting him. It didn’t seem right to stay above a few minutes, so I wished him all the very best and that I hoped he would get better soon and said my goodbyes. I didn’t realise at that point that it would be the last time I would see him, as he passed away peacefully the week after on June 27, 2017 – a very sad day indeed.

The final book in the “Paddington” series to be written by Michael was released on June 27, 2018 to mark the anniversary of the day that he died, which was also the 60th anniversary of his first book!

I am very happy to have these memories to treasure!

On the morning of June 22, 1948, the HMT Empire Windrush pulled in to Tilbury docks, Essex, carrying 802 hopeful Caribbean migrants on board....
Read more

Is this the ultimate top 10 greatest Manchester bands of all time?

We’re taking you on a whistle-stop tour of the best bands to come out of our city in the 60s, 70s, and of course...
Read more

Manchester’s thriving music scene needs our support through the pandemic

Manchester-born and Stockport bred Jay Taylor has been a part of the city's music scene for the last 18 years. He’s played in bands, promoted...
Read more