Patients of Dukinfield Medical Practice (DMP) got their first look at the brand new extension that will be their future surgery facility, on Concorde Way, Dukinfield, at the Open Day on Saturday 30 July 2022, which was organised by the practice and their Patient Participation Group (PPG) and Health Champions DMPHC), who were on hand to show people around and answer any questions that they may have.

The visitors were shown around the new doctor’s consulting rooms on either side of the reception, rooms for nurses all together down one corridor, a patient waiting area opposite reception, as well as the garden, offices, meeting rooms and telephone stations upstairs. Our Tameside reporter, Bob Alston, was there to bring us this report and take some photographs of the celebration.

“Planning for the Open Day at DMP started some time back, as soon as the builders gave an indication of when the work would be completed. The practice then discussed who they wanted to perform the official opening.

The surgery exists to serve its patients, so what better way to mark this momentous occasion than to get a couple of them to perform the opening. They finally decided, wouldn’t it be fitting to ask the oldest patient, Ivy, who is one hundred and three years young, and the youngest patient, Riley, who is just seven weeks’ old, to do the honours!

Coincidently, Ivy and Riley are from the same family, so this seemed even more appropriate.

Ivy is an amazing, active lady and she agreed, without hesitation, to cut the ribbon on the day. Obviously, Riley just smiled when he was asked!

With the guests of honour now in place it was full-steam ahead to decide what else was needed, and the PPG and DMPHC were jointly involved with the practice to make the day a success.

In common with a lot of surgeries, DMP had to think of new ways of working when Covid hit the country, and one of those was using text messaging to communicate with their patients, so it was thought that this method would be used to send out invites for the Open Day as well as advertising it at the surgery.

The day arrived and everyone was amazed at the turnout, with some patients arriving early; eager to see their new practice. But they were happy to wait for Ivy and Riley before they crossed the threshold.

Ivy arrived in good time with her daughter, Kath, but where was Riley? After a couple of phone calls, the waiting crowd was informed that he was on his way accompanied by his parents – a little late, but, you see, young Riley couldn’t tell the time and was in no mood to be woken!

Dr Dowling, one of the practice partners, was asked to say a few words by way of introduction, and, considering he had no idea he was going to do this, he did a superb job!

The event was to last two hours, but with so many people attending throughout it ran over a little. Not surprising really, as there was cake, tea, coffee, juice, and biscuits!” 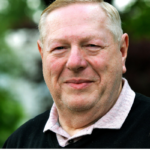