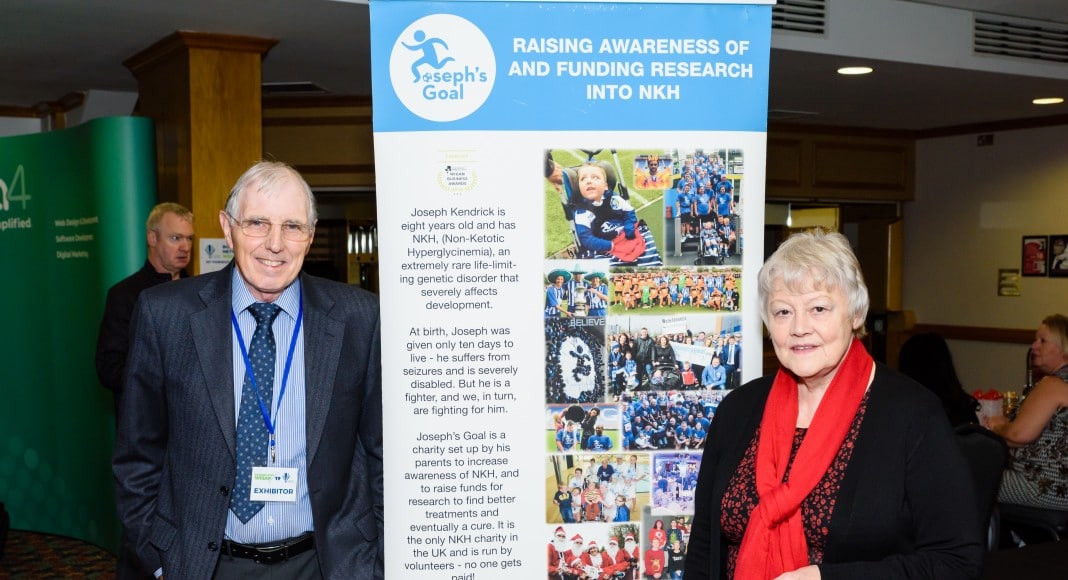 Super gran and granddad dedicate retirement to fundraising for their grandson and other children with a rare genetic condition.

Whether it is organising local collections, attending networking meetings to drum up business support or organising a fundraising ball, two grandparents from Wigan can be found doggedly raising money for their 10-year-old grandson and 500 children across the world who are affected by a rare genetic condition, Non-ketotic hyperglycinemia (NKH).

Norman, 73, and Ann Kendrick, 72, are grandparents of Joseph Kendrick who is the namesake of charity Joseph’s Goal – the only charity in the UK that exists to fund research into finding treatments, and ultimately a cure, for the condition.

Their efforts so far have seen them pick up a Lifetime achievement award from Wish FM in 2018 and help to raise £800,000 to date.

The couple brought up their family of two in Standish, Wigan and were looking forward to beginning their retirement in 2009 following busy careers as an assistant headteacher and a headteacher of a children’s centre. 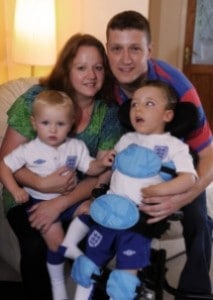 But the same year, their first grandchild, Joseph Kendrick, was born. The third day after he was born, Joseph was diagnosed with the rare genetic condition, Non-ketotic hyperglycinemia (NKH).

Norman says: “He was in a coma and they didn’t know why. Our son Paul [father to Joseph] was working in Leeds, so Joseph was in Leeds General Hospital.

“We were visiting every day, and the hospital staff were concerned that Joseph was not crying like the other babies on the ward.

“We naively thought it was good news when Joseph was tested for various conditions and time and time again the tests came back negative – but then you realise, the more results that come back negative, that it is something more serious.

“They told us it was NKH and at the time, it meant nothing to us. They sat the family down to explain what it meant. You can never be prepared for something like that, you start asking what is he going to be like and then you find out he will never walk or talk, and he will have seizures.

“They said he would not live more than 10 days – most children die at birth. Then it was a month, then it was 6 months, and then a year.

“We waited, but it didn’t happen – after a month they told the family they can go home and they were given a named doctor at the hospice.”

Ann adds: “We had just retired- he was our first grandchild – you have all these expectations and then your life gets turned upside down. We were travelling to Leeds every day to help look after Joseph – we’ve spent some time on the M62!

“Three years later, the decision was made, after Joseph’s named consultant in Leeds retired, for our son Paul and his wife Emma to move back to Wigan with Joseph and be closer to family.

“By then, they’d wake up in the morning and Joseph was alert and ready to start his day – and you forget all the other things. They decided he was stable and so it was a good time to start raising money to fund research after Paul found there was no charity in the UK doing so.

“When we started – and for the first three years – we were the only charity and family driving the fundraising. Now, there is fundraising happening across the country as the family have connected with other parents affected by the disorder.”

They started Joseph’s Goal in 2012 and Paul, who is the Wigan Post sports reporter, garnered the support of Wigan Athletic at a significant time in the club’s history.

Norman says: “Wigan Athletic had made it to the FA final at Wembley in 2013 – and we were able to officially launch the charity with Joe being the mascot.

“Wigan Athletic captain Emmerson Boyce asked to carry Joe out onto the pitch at Wembley – a moment we will never forget and an image that then went around the world following the club’s win that day.

“It was a marvellous day to be a part of – and couldn’t have been a better way to launch it. We were staying at a hotel in Wembley full of Wigan Athletic supporters. When we returned to the hotel after the match the fans recognised Joseph and gave him the warmest applause.”

Norman and Ann were very much involved from the beginning – from registering the charity in its inception to chasing gift aid and encouraging businesses to raise money for the cause.

Ann said: “At the moment we promote corporate fundraising by attending Launch Events North West monthly networking sessions – Nichola and Jo have been very supportive to us – as well as Greater Manchester Chamber of Commerce networking meetings, which happen every three months. We love meeting new people and gaining new support and are busy following up the people we meet to support our fundraising challenges such as Joseph’s Jumper Day or buying charity Christmas cards.

“I find it easier to ask for support when it is not for myself – but for Joe and for children like Joe. It does give you a purpose. You go to sleep planning things and then wake up thinking, what will we achieve today!”

Norman added: “Ann gets in where others don’t – she has become quite the networker!”

At ten years old, Joe is the second oldest boy in the UK to have the condition.

Ann says: “You want to feel like you’ve done all you can for Joe. The older Joe gets, it spurs you on to do all we can to try and find a treatment

“Money from Joseph’s Goal goes straight to researchers as unrestricted funds. Dr Nick Greene of UCL, who leads the UK arm of NKH research, has stated that the money the charity has raised has accelerated research by 12-18 months so you feel like you are making a difference – it is really satisfying.

“We like talking to people and organising things – which are certainly transferable skills from our careers. As a family, we all pull together to raise funds. We do the networking, Paul works on the awareness in the sports world and Emma connects with families of children living with NKH across the UK, and Norman’s cousin, Alan, looks after the accounts and is Chairman of the Board of Trustees.

“We also help to organise events. Our biggest fundraiser is Walk4Joseph it’s become our biggest earner. We personally don’t walk it but we are in the support car!

“We also have a Legend’s Football Event – including Roberto Martinez and Andy Burnham signed up to play – but we will be postponing it for the time being.

“We’ve had incredible backing from the people of Wigan – including Wigan Council, Wigan Athletic and Wigan Warriors as well as businesses and we would urge others to get on board – when the country is back to normal service.”

If you’re looking for a charity to support – please get on board to support a local cause. For more information visit: http://www.josephsgoal.org/how-to-donate/

Norman, Ann and their family are now desperately looking for new ways to raise money for Joseph’s Goal, having seen their fundraising efforts significantly affected by Coronavirus.

Norman said: “We desperately need to find alternative ways to raise funds for essential research to find a cure for NKH, especially as Dr Nick Greene and his team from UCL are very close to clinical trials for new treatments.”

The charity is setting up an Elite Club of members who would make a monthly donation, which would also enter them for a monthly draw. The aim is to recruit 200 members, each paying £5 a month, who would generate an income of £1,000 per month, to be shared equally between a draw for prizes and Joseph’s Goal. This would generate annual amounts of £6,000 to both the prizes and Joseph’s Goal.

If you are interested in supporting this scheme, please email [email protected]