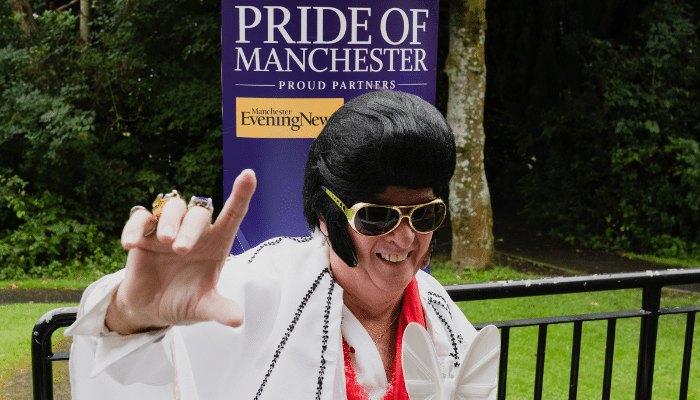 Thank you very much: Swinton’s answer to Elvis wins honoured for decades of fundraising

DJ and Elvis impersonator Jim Nicholas has been honoured with a Pride of Manchester Award after raising more than £200,000 for Francis House Children’s Hospice.

For more than half a century Jim has taken to the stage at hundreds of club venues with his unique mix of music and Elvis performances, and at each show, he puts out a collection box for the charity.

The 73-year-old from Swinton was presented with the award by Pride of Manchester award by actress, singer and former Coronation Street star Kym Marsh.

Jim thought he was attending a hospice fundraising meeting at a hotel and his wife Denise even persuaded him to dress in his Elvis outfit for the occasion. But he was met instead by Kim and leaders from Francis House. After being handed his trophy, Jim performed a short rendition of the Elvis classic ‘Are you Lonesome Tonight’.

He said: “I’m so proud that someone has thought about nominating me and I feel very humbled to get this award.”

Jim started performing at 18 and went on to get regular slots as a DJ and Elvis impersonator. He worked as the head gardener at Bishop of Salford’s residence at Wardley Hall, Worsley, when he was introduced to Francis House in the early 1990s.

He added: “I am hoping the fundraising has helped the families who come to Francis House and the staff who do a heck of a job to care for them.

“If I stay in good health, I’d love to continue fundraising. I get a real buzz from performing and a big thrill from getting on that stage. As long as people enjoy themselves – and they must do as they keep coming back – then I’ll keep doing it and raising money for Francis House.”

Coronavirus restrictions ruled out the glittering red carpet evening planned for the Pride of Manchester Awards, organised by the Manchester Evening News in partnership with TSB. But all the winners were instead honoured in a virtual celebration.

David Ireland CEO of Francis House said: “What Jim has achieved is phenomenal. He has shown incredible generosity and commitment to Francis House with his fundraising for more than 25 years. I have had the pleasure of knowing Jim for a long time and he lives for doing things for other people. We are thrilled his dedication has been recognised with this fantastic award.”

Francis House Children’s Hospice supports more than 500 families of children and young people with life-limiting conditions from across the whole of Greater Manchester including, Bolton, Bury, Oldham, Stockport, Trafford, Cheshire and Manchester.

The charity relies heavily on donations to fund the bulk of its work and has been hit hard with the cancellation of fundraising events as a result of the coronavirus crisis.

For more information on Francis House go to www.francishouse.org.uk