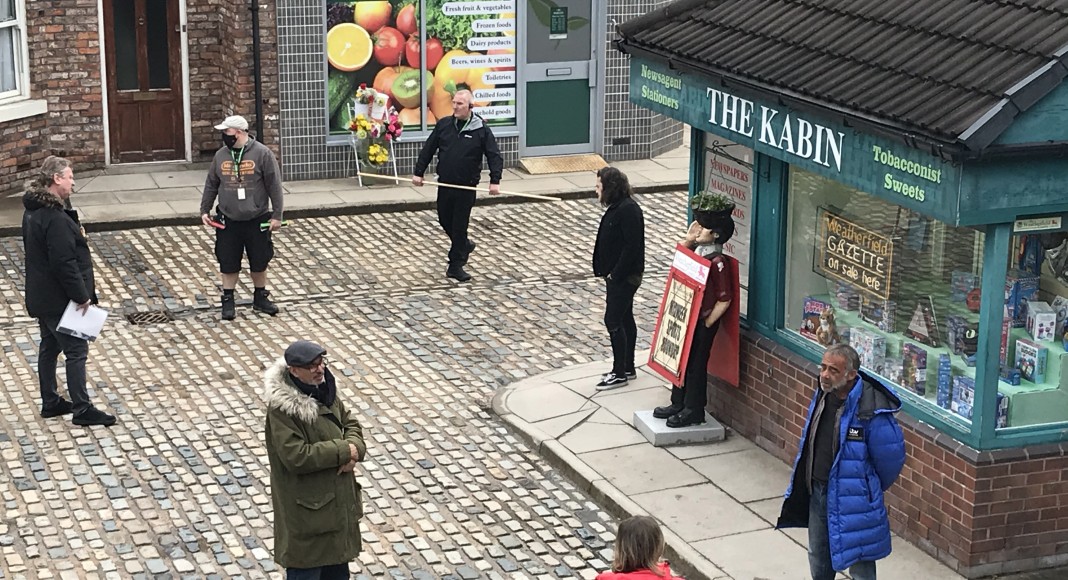 The Coronation Street cast has returned to the cobbles after being in lockdown. Over the past few months, the show had relied on its catalogue of pre-filmed programmes, but we can now expect new episodes from Friday, July 24.

To meet social distancing measures, there will be no kissing or cuddling in scenes, limited persons on set and actors will be asked to do their own make-up.

In this clip on Coronation Street’s Instagram, Colson Smith, who plays Craig Tinker, speaks to a senior production manager about the commencing changes.

In the early days of lockdown, there were concerns that as the soap could not be filmed, possibly making it the first time in the show’s 60-year history that it would fail to air, which would have been a huge blow for the whole country – but especially us Mancs!

“The whole team at Coronation Street has pulled together to generate an ingenious, intricate set of protocols, to allow filming to restart as safely as humanly possible.

“We are really pleased to able to resume making the nation’s favourite soap at a time when people need the reassurance of their regular Corrie fix more than ever.

“Safety remains our number one priority and we are under no illusions about the challenges still facing us and the nation as a whole.

“However, I can assure viewers that Corrie’s ever-present humour and brilliant storytelling will be there in abundance in the episodes due to begin filming next week and beyond.”

As long-time fans of the show, Talking About My Generation takes a look back at our top five Coronation Street storylines of all time, while look forward to new episodes that will tackle the big storyline of the coronavirus pandemic.

After meeting Coronation Street resident Gail Platt, Richard laid on his signature charm until he became husband number three. However, underneath his cool exterior lay an unthinkable evil.

While on the show, he: manipulated Gail into believing her mother, Audrey was insane, attempted to kill both Audrey Roberts and Emily Bishop, successfully killed his ex-wife, Patricia and Ashley Peacock’s wife, Maxine.

Richard’s rampage came to a head when he attempted to drive himself, Gail, her children David and Sarah and granddaughter Bethany into the Weatherfield Canal. Although Richard met a watery grave, the rest of the family survived.

There must be something about the cobbles that attracts criminals, with Pat being up there as one of the worst.

During his time on the street, Phelan committed every crime in the book, murder, blackmail and assault.

After having successfully faked his own death, he was found by Gary Windass and brought back to Weatherfield. Following an escape and a hostage situation, he was fatally stabbed by Anna Windass.

You can catch-up on the crimes of Pat Phelan here.

Although many viewers found this to be a very upsetting storyline, the show’s writers were applauded for bringing to light such a sensitive subject.

Plagued by self-esteem issues after being bullied, Bethany met 35-year old Nathan Curtis. He would later lure her into becoming involved in a grooming gang, coercing her into having sex with many men.

In 2017, she finally reported Nathan and his associates to the authorities. Prior to this, she was almost sold into prostitution, abroad.

Tragedy struck the street in 2010 after a derailed tram crashed onto the street, which was caused after an explosion made the viaduct collapse.

This storyline marked the 50th anniversary of the show, spanning multiple days broadcast, with the inclusion of an hour-long live episode.

This mirrored the tragic 1967 train crash after the locomotive also became derailed and crashed onto the street.

Never before has a storyline become such a big part of pop culture, which is why we’re awarding it our top spot!

Poor Deirdre found herself wrongfully imprisoned after her fraudster fiancé, John Lindsay implicated her as his partner in crime – which of course she was not.

Despite being innocent, a mountain of “evidence” resulted in Deirdre receiving eighteen months in prison, while Lindsay was handed a suspended sentence.

The nation was outraged on behalf of Deirdre, with even Prime Minister, Tony Blair backing the campaign to “Free the Weatherfield One”.

Take a trip back to the 90s by re-watching her sentencing here.

What do you think of the new social distancing measures in place on the set of the show? Do you agree with our top five selected storylines? Do you have any other favourites that we have missed? Let us know in the comments!