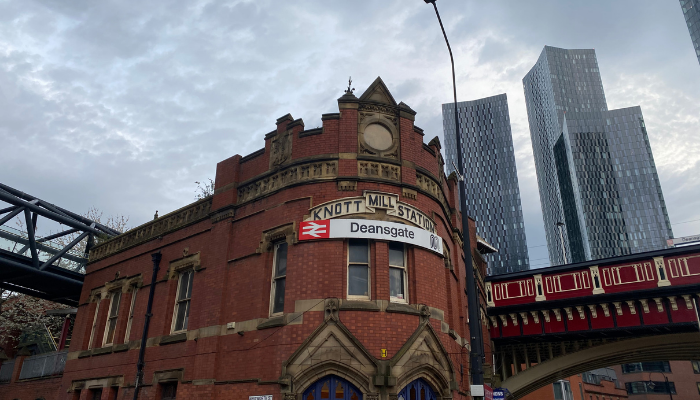 If you take trips into Manchester City Centre often, you might have noticed that Deansgate train station still retains its original sign and name – the Knott Mill Station. We take a look into the history of the popular railway stop and why it was changed.

The original station was opened on Hewitt Street as Knot Mill and Deansgate on 20 July 1849 by the ‘Manchester, South Junction and Altrincham Railway’ near the Manchester terminus of the Bridgewater Canal.

In 1849, travellers could catch a train there which could get them to Liverpool in four and a half hours for just sixpence. This was considered very cheap and this was due to other competition from the London and North Western Railway. In 1853, the price went up to sixteen pence.

The station was badly received and according to its critics: “Inconvenient of approach, ugly in appearance, and with platform, booking office, and waiting-room accommodation much cramped” (noted in the Manchester Courier and Lancashire General Advertiser, 6 May 1893).

The area in which the station was then positioned was known for its annual ‘Knott Mill Fair’ which hosted acts such as Pablo Fanque‘s Circus Royal and George Wombwell‘s Menagerie.

If the station was originally named “Knot Mill and Deansgate” by the MSJAR as history suggests, from its opening onwards, it was simply ‘Knott Mill’ to the Manchester papers and by 1860, the railway was following suit in its advertisements.

in 1880, a correspondent to the Manchester Courier suggested that the station be renamed Deansgate because “Very few lady passengers who have shopping to do in Deansgate make use of the Knot Mill Station. If they are aware of its nearness, perhaps they are waiting for the station and its approaches to be improved.”

After long disputes over what should be done with the station, new work finally started in March 1895 (by June 1895 a temporary entrance from Gaythorn Street had to be used and the previous entrance from Deansgate closed) and was completed in September 1896.

The station became Knott Mill and Deansgate, for railway purposes. To the local press, it remained Knott Mill station and only began to be referred to as Deansgate at the start of the 1970s.

Today, it is known as ‘Manchester Deansgate’ or just ‘Deansgate’, but the Knott Mill sign still resides.

Do you have a story for us? Please email [email protected]