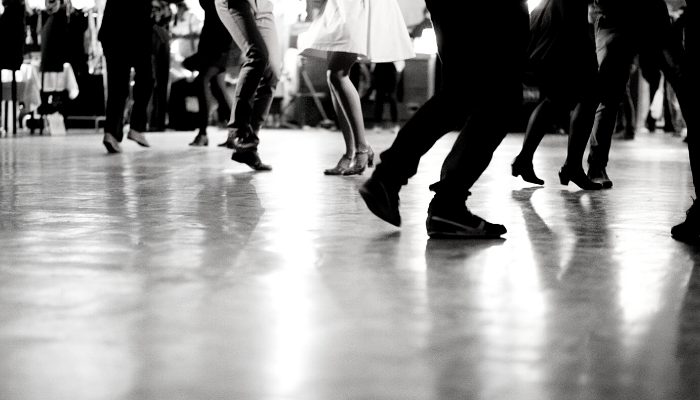 Who remembers their disco dancing days? Have you still got your Motown moves or Northern Soul shuffle? Do you still enjoy a good boogie? We know we do! Kitchen dancing has been high on the agenda through the pandemic and we can’t wait for venues to open to cut a rug.

Here our Salford reporter Chris Vickers takes a trip down memory lane back to his nights out with the lads, dancing and romancing in his fawn stay-press trousers after an afternoon of footie.

“My earliest disco experience was going to a little place in Irlams O’th’ Heights, just off the A6, called Reggie’s. I remember getting togged up in my fashionable new gear and meeting a couple of mates outside. I distinctly recall entering the premises and being taken aback by the unprecedented volume of the sound as the Supremes belted out Baby Love.

“I was taken aback and intoxicated as the music swirled and eyes adjusted to the darkness and the twinkling, intermittently flashing lights.

“Seriously self-conscious youngsters in an alien new environment desperately trying to appear cool and worldly-wise while reality slowly dawned that we were by no means the coolest people in the room.

“In later teenage years I was lucky enough to belong to a large group of boys and girls who hung out together and regularly partied in vacant houses when parents were away. We also attended whatever local discos we could find: Monton Cricket Club, Co-Op Building, Manchester and RAF Club, Sale for example. By far our favourite venue, however, was St Lukes, the Height, on Friday nights.

“We danced and swayed to the impossibly cool sounds of Motown, Soul and Stax: Marvin Gaye, Little Stevie Wonder, The Tops, The Tempts, Sam & Dave, Booker T, Otis, Aretha and Jimmy Ruffin’s poignant What Becomes of the Broken Hearted?

“I guess that we channelled Northern Soul in that we lads had cropped hair and dressed in fawn stay-press trousers, brown brogues, white shirts and ties with wide Windsor knots.

“We all bopped along as the DJ’s selections surpassed each other favourite following favourite, admiring circles formed as the more competent lads confidently took over the floor going down to the ground and then springing back up performing ‘majestics’ in rhythm to the sounds. Love sprang eternal as the discos came to end and the DJ’s put on the ‘slowies’. Couples swayed together locked in an embrace as the music washed over them.

“On Saturday nights we largely decamped to the CIS Building in Manchester to enjoy the same music and bounced around to it, literally, on an amazing sprung floor. We’d go there after playing football in the afternoon, scrubbing up after the games and marinating ourselves in Brute in an effort to attract the opposite sex. I’ll never forget the night our goalie accompanied us after a nasty kick to the head in that afternoon’s game, immaculately clean and smart but with head bandaged like the Invisible Man, not wishing to miss out on the fun, and seeing no reason why he wouldn’t ‘pull’ that night. In fairness though, we might as well as all have bandaged our heads in the same way, as we seemed equally invisible to the girls.”