Volunteering at the Met in Bury

Our reporter David also volunteers for The Met in Bury and tells us how he gets involved… and why you should too!

The Met has an excellent reputation as one of the vital cultural heritage places in Bury, alongside the East Lancashire Railway, The Art Museum, and the Fusiliers Museum. Bury Metropolitan Arts Association was founded in 1975. The association originally operated out of a disused bank building at 2 The Rock, promoting events in civic halls and parish churches. It moved into the Derby Hall in 1979.

The Met is at the heart of live music and theatre in Bury. An exciting programme, beautiful facilities, and a warm welcome awaits. Local theatrical productions, a good mixture of musical acts from around the world, comedy nights, music and other workshops, and more besides are on offer.

The volunteers are of all ages, however there is a strong presence of over 50s. Many like myself have been volunteering at the venue for many years. The opportunity to work at the theatre means you feel engaged and supporting the local community, get the satisfaction of helping people attending music and arts events, and the big benefit of being able to watch the show free of charge.

By way of illustration, the photos are of Le Vent du Nord, from Quebec, Canada. They have performed at the Met on several occasions and bring their distinctive French speaking Québécois folk music to Bury.

They’re just one example of the whole world coming to Bury, and the opportunities for diverse entertainment that may be enjoyed in this part of Greater Manchester.

I have enjoyed seeing over 100 acts in a ten year period and encourage others to get involved. It’s a fantastic way to have a fun and engaging activity!

Karen McIntosh said: “Volunteering at The Met has opened up a new community of lovely people to me. I was welcomed to the Met as an extra pair of hands in the office at first and soon found out how nice it was to be appreciated! (After struggling at work for years).

“Then, working in the theatre as an usher has boosted my self-esteem and helped me come out of my shell. I’ve been made to feel like part of the team, and this is so important. The festival (Head for the Hills, in Ramsbottom, run by the Met) volunteering is physically hard work, but the rewards are being part of a great team – and a whole bunch of new friends – who can make a difference to the whole ‘audience experience’.

“The Met has been part of my life for over 30 years now, first as a customer and for the last ten years as a volunteer – long may it continue.”

Janet Halliwell said: “Whether I’m attaching wristbands, giving directions, picking up litter or manning a stall, it’s great to see so many people enjoying the sunshine and the music. To be part of that mellow, happy community is great.” 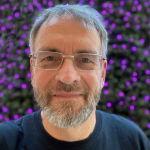 What the F: Be a savvy saver this summer

How does David’s garden grow?

How does Lesley’s garden grow?