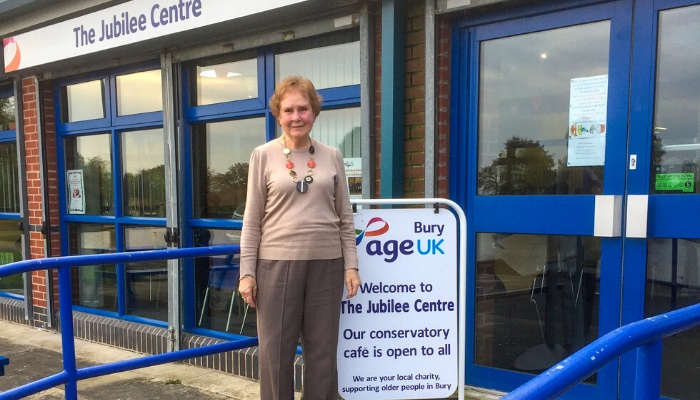 VOLUNTEERING: IS A TWO-WAY STREET

Chair of Age UK Bury Joan Rees, has been volunteering for more than 25 years, having first volunteered at the charity’s Jubilee Centre in 1995 when she was just 54. Now at 78, and despite two heart attacks and losing her husband, she continues to enjoy volunteering – and goes by the motto: “If you help others, it helps you, it enriches your life”.

Here our reporter, Lesley Downing, managed to pin this busy woman down to get an insight into her volunteering journey.

Sitting in the lakeside café in the Age UK Jubilee Centre, Clarence Park, Bury, trying to chat to Joan was at times quite difficult. We just kept getting interrupted. Not surprising really. Joan first volunteered here when she was 54 and has become something of a focal point for the centre.

Joan has worked in public service all her life, working in environmental services, serving as the medical officer in the public health department, and following re-organisation in 1974 became a Deputy and then Superintendent Registrar. Since 1995 she has been the Welfare Officer for the Bury Unison Branch, supporting members both emotionally and practically. A very busy and committed lady. When she was in her early 50s she had a heart attack, and, following a second one, decided to give up work. But, well, you can’t just stop, can you? She volunteered at the centre almost immediately. After 12 months she was trained to give advice on insurance at the Age UK shops, and was soon invited onto the Trustee Board. Since then she has been constantly involved, became the Deputy Chair of Bury Age UK for seven years and has now been their President for the past two and a half.

Joan helps to organise trips, holds Friends of the Centre meetings, and is on-hand and involved in most aspects of the centre, a seemingly tireless force of nature.
But she doesn’t stop there. She has also been a member of the Soroptimists International (Bury) Club since 1982 and is now in her third term as their President. This is a woman’s organisation whose aim is to improve work and general conditions of women throughout the world, through “education, empowerment and enabling”, working both locally and overseas. And – if that’s not enough, she’s also the Secretary of Tottington Ladies Luncheon Club, where, presumably, she fits in a bite to eat occasionally. Joan is very modest about her volunteering. She says: “If you help others it helps you, it enriches your life”.

When her husband died in 2015 she found that the volunteering helped her through the grief, adding: “Keeping busy is the best solution for losing a loved one, it gives you a sense of purpose, something to wake up for, you feel less bereaved, less loss. It helps to make a difference in people’s lives, trying to alleviate others loneliness, and seeing people join in.”

Joan, despite, or because of, all this busy-ness has a calm and contentedness about her – she’s happy, fulfilled. I left her chatting to her friends, colleagues, team, about events to come, what’s next, what’s round the corner – what shall we do, what can we do? What will tomorrow bring?