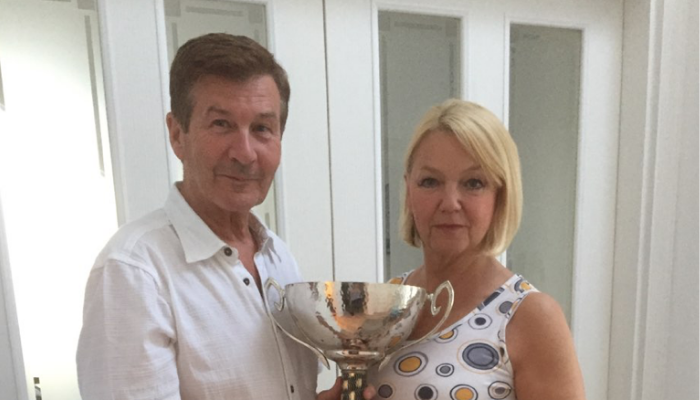 Strictly Fun – how one couple turned their passion into a career

10/01/2020
By Lesley Downing
BuryFeaturesLifestyleRochdaleSportThings To Do

Alan and Ginny Newman thought it was plain sailing from now on. Alan had worked as a joiner in the same firm since he left school, progressing to company director. Ginny had a secure profession in nursing. Both cresting 50 they had brought up 3 daughters, who were all forging independent lives and their own families. It was 2008.

Their shared hobby and passion was ballroom dancing. From their early 20’s they had gone along for lessons locally, just for fun, and became enthralled.  With 3 children and fledgling careers, holidays were always budget orientated. Pontins at Southport beckoned.

Pre-Strictly, more Come Dancing, Pontins held 1940’s style dances, where waltz, quick-step and tango skills were a must, so Alan and Ginny played crazy golf by day, put the chalet maids in charge at night, and danced the evenings away.

After a week of tripping the light fantastic they entered the dance competition, and won! The prize – a free weeks holiday at season’s end, but they hadn’t realised that this week was peopled by ‘proper’ dancers, with ball gowns, sequins and tails. Slightly overawed, they plunged in, it was dancing after all.

At the end of that week, another competition, and – Alan and Ginny triumphed again. Following this they were offered advice on how to make the most of their undoubted natural talents by an experienced dance teacher, who helped them negotiate the highly competitive world of amateur dance.

With this support and their own drive, passion and ability, Alan and Ginny went on to become the British National champions five years running, and the British Open champions in 2000 – world class.

Having achieved all they had set out to do in amateur competition, Alan nd Ginny were considering new challenges and new directions.

When the winds of recession blew in 2008 they thought it was time to turn their passion into something more and started looking into teaching.  In the autumn and winter of 2008 they signed up for Dance Class cruises. Thus began a steep learning curve and, eventually, a whole new career path.

Returning from their third successful cruise in April 2009 they learnt that Alan’s company had gone into liquidation, his job for life gone, and only a small government redundancy package. So, instead of being a nest egg for retirement, their teaching adventure became a necessity.

Driven by this they have over the last ten years built up a well-respected dance school, Dance for Fun, with classes in Bury, Norden and Rochdale.

They run group and private lessons from beginners onwards, and throughout the year host dancing holidays, tea-dances and evening social dances.

Now into their 60’s they see their bad luck as a life changing opportunity. Taking up a new career has kept them active in many diverse ways – physically, mentally and socially.

“You can’t just sit back as a dance teacher,” says Alan, “the role involves constant reinvention, re-training, and exploring new styles, of both dance and teaching.”

They regularly attend seminars and have recently returned from a Dancing Congress where they learned new choreography and techniques.  And the odd cruise has them entertaining several hundred people for three hour balls, devising competitions, improving their presentation skills and generally making sure people have fun.

ancing ensures they maintain a high level of fitness, which again means they can enjoy other activities, cycling for Alan and yoga and pilates for Ginny.

But maybe the best gift teaching has bestowed is enabling them to share dance with others.

Ginny added: “Dance is like a workout without the treadmill.

“Dance just absorbs you, lets you forget your troubles for a while, and transports you to a different world, a fantasy world of glitter-balls and sequins.”

Join Jean as she cycles from Reddish Vale to Etherow Park

Come along on an adventure with Jean as she cycles and snaps pictures around some local country parks, with a bit of history along...
Read more

Writing Adventures: Story searching out and about

Our reporter Gill James has been keeping herself busy with creative writing exercises during lockdown and as we ease ourselves into life after lockdown...
Read more

Here, our reporter Jean from Oldham shares her vegetarian loaf recipe for you to try out! Jean said: "Watching the snow fall on the Tuesday...
Read more